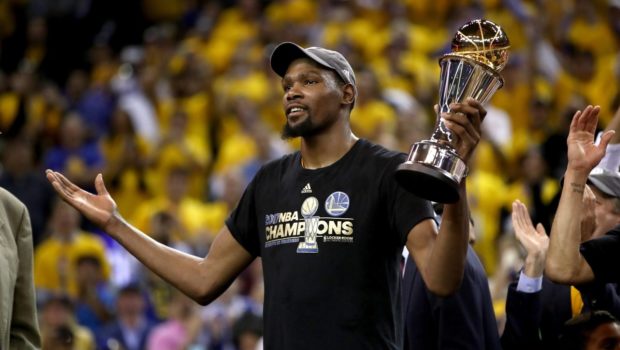 The Golden State Warriors capped one of the greatest postseason runs in the history of the NBA, an unprecedented 16-1 romp through the playoffs, by winning the title with a 129-120 win over the Cavaliers in a tense Game 5 of the Finals.

Kevin Durant (above), the most valuable player of the finals, scored 39 points. Stephen Curry scored 34 points. And the sight of them holding a trophy over their heads wasn’t simply a reminder that every other team spent this year trying and failing to figure out how to stop them. It was also visual evidence of the league’s future: The Warriors are a potential basketball dynasty capable of dominating the NBA for a long time.

The Warriors have a core of star players—Curry, Durant, Draymond Green, and Klay Thompson —who happen to be in their primes. They can keep all of them for at least the next two seasons and, almost equally important, surround them with free agents willing to accept less money for the privilege of playing in the basketball Eden they have created.

That’s why the Warriors are the favorite to win the title next season, too, and once again the season after that. How any mere NBA team is supposed to beat the Warriors is still a question without an answer.

The only team to make the Warriors sweat in the last three years, a stretch in which they won two championships and most games of any team in any era, was the team they had to beat in this year’s Finals. It was also the team that beat them in last year’s Finals.

This championship avenged that crushing loss to the Cavaliers. The Warriors also led that series, 3-1, and found themselves one minute away from being known as the greatest team of all time after winning a record 73 games in the regular season, something that no team had ever done. But then the Cavs did something that no team had ever done. They came back from a 3-1 hole in the Finals and beat the Warriors on their home court in an epic Game 7.

The new, improved, altogether terrifying Warriors were born from that failure. Golden State improved almost immediately upon the publication of an online essay with the nine words the rest of the NBA feared: “I am going to join the Golden State Warriors.” The blogger was an extraordinarily talented basketball player named Kevin Durant.

The Warriors signing Durant, who saved his most stunning performance of the season for Monday, as their consolation prize was part luck and part shrewd management. They were rewarded on the court for every decision they made off the court. A massive, one-time spike in the NBA’s salary cap cleared enough space on Golden State’s books to add Durant, but they never would have been in that position without prudent work by the team’s front office drafting Curry, Green and Thompson and building a team culture that attracted Durant.

The result was a collection of talent so rich that other teams felt the title had been won before the season even started. Then the season began, and the Warriors were scarier than anyone imagined.

They had the most explosive offense statistically in the history of the NBA. As if that weren’t enough, Golden State also had one of the league’s most suffocating defenses. That combination won them a lot of games—67 in the regular season, to be exact, and their first 15 of the postseason—and their advanced metrics put them in the same company as the 1996 Chicago Bulls and even last year’s Warriors among the greatest teams ever.

The difference this year was that Golden State started to peak at the end of the regular season. They were playing their best basketball as the playoffs began. The Warriors won 15 of their last 16 regular-season games and then reeled off another 12-game winning streak to reach the Finals.

To win the championship, though, they would have to beat the Cavs.

It wasn’t surprising when Cleveland and Golden State ripped through the playoffs with a combined one loss after demoralizing the rest of the league into believing their third consecutive Finals showdown was inevitable. The postseason was the same as the regular season: The Cavaliers and Warriors had no competition except for each other.

The Warriors controlled Game 1, dominated Game 2, came from behind in Game 3 and lost Game 4 after Cleveland had one of the greatest shooting nights in Finals history. But the Cavaliers were one upset away from being in unexpected control of the series. All they had to do was win on Monday.

The crowd here was noticeably anxious before and during Game 5—at least until a 28-4 run from the Warriors resulted in Oracle Arena erupting. It was as if the fans had been given a year of free toast. The Cavs still cut Golden State’s lead to three points in the fourth quarter, but they never had a shot to tie the game or take the lead, and the final minutes turned into a cathartic party.

Not even the most sublime player of this generation could stop it. LeBron James being LeBron James was still only enough for the Cavs to win one game.

“They’re going to be here for a while,” James said. “They’re built to last a few years.”

James would know better than anyone. The Warriors were too good for the Cavs. Now, and maybe for a long time, they’re also the NBA champions.