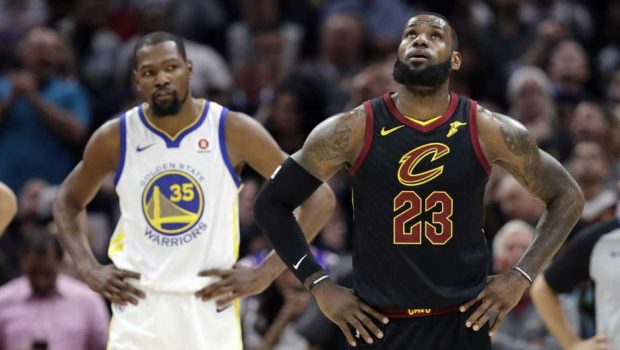 DURANT AND DUBS SHOW CAVS THEY’RE IN ANOTHER LEAGUE!

In the Golden State Warriors’ 110-102 win over the Cavaliers in Game 3 of the NBA Finals, Kevin Durant delivered a 43-point, 13-rebound, seven-assist gem to lift his team within one victory of its third league championship in four years.

On a night Stephen Curry and Klay Thompson went a combined 7-for-27 from the field and 3-for-15 from three-point range, Durant made sure the visiting Warriors had all they needed: a chance come crunch time.

“He’s one of the best one-on-one players in our league,” Cleveland head coach Tyronn Lue said of Durant. “Holding Steph to 11 points and Klay to 10, you would think you would win that game.”

After Kevin Love made two free throws to give the Cavaliers a 97-96 lead with 3:11 left, Curry finally pulled out of his shooting slump, hitting a layup and a three-pointer — ending a drought of nine misses from deep — to give Golden State a four-point cushion.

Moments later, after LeBron James responded with a three-pointer of his own, Andre Iguodala threw down a dunk over Tristan Thompson. It wasn’t long before Durant drilled a 33-footer from the top of the arc — in almost the exact same spot as his iconic shot over James in Game 3 of the 2017 NBA Finals — to put the Warriors up 106-100 and help seal Cleveland’s fate.

Golden State now enters Game 4 on Friday with a 3-0 series lead, a severe blow for a Cleveland club that has made a practice out of overcoming long odds. But no team in NBA history has won a playoff series after dropping the first three games — and that’s in 131 tries.

“We’ve got a lot of guys who can score and fill it up, and they lift each other up if one of them is having a tough night,” Warriors head coach Steve Kerr said. “It’s a nice luxury as a coach, that’s for sure.”

In the aftermath of the Warriors’ 2016 NBA Finals collapse to Cleveland, the Warriors had to come to terms with the fact that even with a core of Curry, Thompson, Iguodala and Draymond Green, they were vulnerable against physical teams that forced them out of their ball-movement principles. Without another world-class scorer, they were perhaps too reliant on Curry and Thompson hitting three-pointers.

Weeks later, Golden State signed a player in Durant who can bail his team out of the most dire of circumstances. Even the stingiest of defenses can’t contend with one of the best scorers in NBA history using his 7-foot-4 wingspan to drain fade-away jumpers from near-endless range.

Three nights after Curry, Durant and Thompson fed off each other’s strengths to power the Warriors to a 19-point win over the Cavaliers in Game 2, Golden State allowed Cleveland’s physicality to force it out of its pass-happy ways early in Game 3. With the Warriors’ motion system stagnating, Curry and Thompson repeatedly settled for contested shots.

After Golden State dug a quick 16-4 hole, Durant went to work, using a mix of fade-aways and drives to the rim to cut the Warriors’ deficit to 29-28 at the end of the first quarter and down 58-52 at halftime. His scoring opened passing lanes and freed up easy looks for role players like JaVale McGee (10 points in 14 minutes), Jordan Bell (10 points in 12 minutes) and Shaun Livingston (eight points on five shots).

It didn’t help Durant’s efforts, however, that James — essentially a solo act in the series’ first two games — got significant contributions from his supporting cast.

Love, who was embarrassed multiple times by Curry in Game 2, chipped in 15 of his 20 points in the first half. J.R. Smith went a long way in exorcising the memory of his Game 1 time-and-score blunder by chipping in 13 points. Rodney Hood, whose sudden benching was a major story line entering Wednesday — he totaled four minutes in Games 1 and 2 — resuscitated his season with 15 points on 7-for-11 shooting.

Back from a bone bruise in his knee that sidelined him two weeks, Iguodala teamed with Durant, among others, to make life a bit more difficult on James. After ringing up a combined 80 points on 29-for-52 (55.8 percent) shooting, 17 rebounds and 21 assists in the first two games, James had to work harder to get open looks, shooting 13-for-28 (1-for-6 from three-point range).

By the time the final buzzer sounded, he had a triple-double: 33 points, 11 assists, 10 rebounds. It didn’t matter.