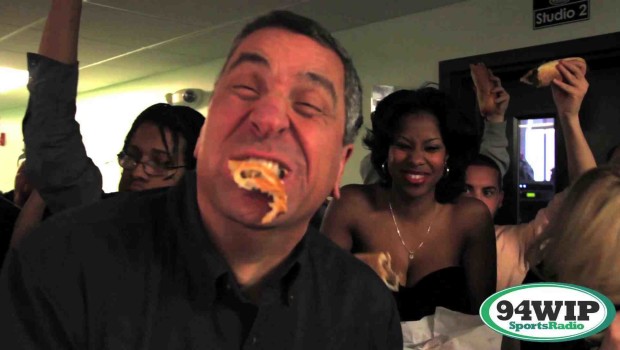 If you believe everything that this moron has written and said, the Sixers are moving to Newark!

Rarely does a day go by that radio talk show host Angelo Cataldi doesn’t say something uninformed and stupid.

It is passing understanding to explain how this phony gets a paycheck from anyone.

Just today, in something called the PhillyVoice, he proved once again how little he knows about what the Philly fans want or need from our teams and their execs.

It is Cataldi’s view that Sixers’ general manager Sam Hinkie should be held to account by the same standard of a Secretary or Defense of a President, both of whom are accountable to the people who pay them with public dollars.

Hinkie is paid by Josh Harris, the Sixers’ owner, and therefore is accountable to him and him alone.

Not Cataldi, who is just pissed off that Hinkie won’t come on his morning radio show. And, since Cataldi doesn’t care much for the facts, he should know that last season only 23,000 sets of eyeballs watched the average Sixers game on CSN.

Which means, nobody cares about Hinkie and the Sixers.

When Hinkie succeeds they will care, but right now the number people who even know who he is can be computed by adding up the number of people who work for newspapers, radio and TV stations and digital sites like this one.

This is what Cataldi wrote today:

Hinkie has polarized Philadelphia more than any sports figure since former Eagles coach Buddy Ryan. He has an alarming number of supporters who not only admire his unusual rebuilding plan, but somehow embrace his secrecy – even though they are also victims of their hero’s evasiveness.

Let’s agree to disagree about Hinkie’s rebuilding program. Can we at least band together in demanding that a GM tell us the truth about our team? Or does the power entrusted in Sam Hinkie by his cult allow him to lie, too?

And one more thing: It has been two weeks now since the Sixers acknowledged the need for a second surgery, and yet all we know – courtesy of TMZ.com – is that Embiid had dinner last week at Mr. Chow in Los Angeles. Is it asking too much to be told when he will have the operation?

Never let your guard down. Never.

Is this really the way we want Sam Hinkie to run our basketball team?