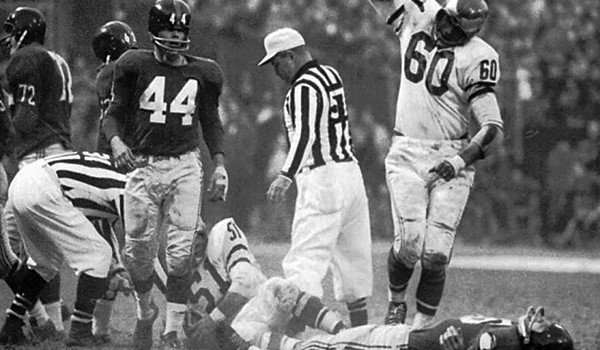 Tell that to New York GiantFrank Gifford, whose clock was cleaned here in 1960 by Eagle linebacker Chuck Bednarik, and when he died last year it was determined he suffered from CTE!

He isn’t buying that football is linked to head trauma and brain disease like CTE. In fact, he thinks that it’s absurd to relate the two.

One week after NFL senior vice president for health and safety Jeff Miller told a congressional roundtable that football should be linked to CTE, Jones fired back to reporters at the owners’ meetings in Florida.

He said via ESPN:

“We don’t have that knowledge and background, and scientifically, so there’s no way in the world to say you have a relationship relative to anything here. There’s no research. There’s no data. … We’re not disagreeing. We’re just basically saying the same thing. We’re doing a lot more. It’s the kind of thing that you want to work … to prevent injury.”

“No, that’s absurd. There’s no data that in any way creates a knowledge. There’s no way that you could have made a comment that there is an association and some type of assertion. In most things, you have to back it up by studies. And in this particular case, we all know how medicine is. Medicine is evolving. I grew up being told that aspirin was not good. I’m told that one a day is good for you. … I’m saying that changed over the years as we’ve had more research and knowledge.”