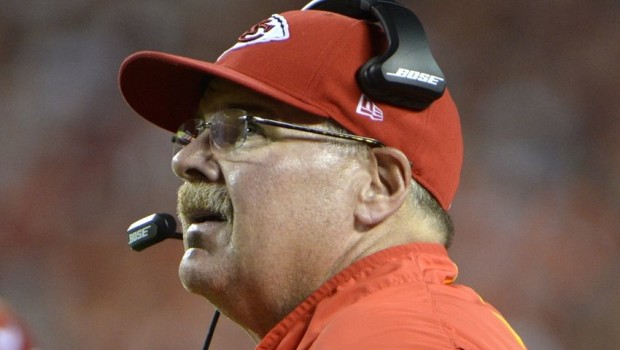 Eagles fans are very familiar with this What Do I Do Now? look that cost the Birds dearly during Reid’s 14 years in Philly and handed the Broncos a 31-24 victory over Reid’s Chiefs last night.

Andy Reid and the concept of clock management go together like oil and vinegar.

Let’s not go there, since Eagles fans are still pissed off that their then coach blew clock management in the last two minutes against the Patriots in the 2005 Supe in Jacksonville as the Eagles lost 24-21 in their last chance to win the Big Game.

Every football game contains dozens of moments that swing momentum, but Reid’s decision last night in Kansas City, where he is now the coach, is the one that will reverberate all week.

He had overtime against a Broncos offense that hadn’t been moving well. There was no need to try anything else, particularly with Alex Smith at quarterback. Just play for the extra session, hope Lamar Charles can break a run instead of fumble and maybe go home a winner.

But no; it’s as if Reid coaches the game without a clock in his view.

But with the Week 2 game between their respective teams tied at 24 and the Chiefs pinned deep into their own territory with 36 seconds left and just one timeout, the two combatants, one with a headset on the home sideline, the other with a Broncos helmet on the away side, appeared on a crash course for overtime that would involve neither of their respective kryptonite. That is, until Reid went searching for some.

Remember the situation: Tie game, 40 yards, at minimum for a field goal attempt, 36 seconds, one timeout. What to do, what to do. Take a knee to milk the clock and play OT in front of 76,000 rabid fans? Nah. Throw a short pass to the sideline in a spot that only your player can grab it and hope to take advantage of soft coverages to get into field-goal range? Nah. How about running the ball through a gauntlet of heavy arms in an attempt to, what, gain five yards so you’re at your 25-yard line and forced to call a timeout so that you now have a minimum of 35 yards to go in 29 seconds without a timeout?

With that play call, Charles, who had a big fumble in the first half that led to the Broncos tying the game at 14-14 going into halftime, ran the ball right into the line. Any back in that situation would have fallen at first contact, cradling the ball like it was a newborn. Not Charles, who apparently has been listening to Reid’s late-game strategy lessons too well. Brandon Marshall made a great punch on the ball, but a running back needs to have that cradled so such a punch is for naught.

Charles didn’t, the ball fell, Bradley Roby scooped it up and the Broncos somehow escaped with a 31-24 victory to set the NFL record for most consecutive road wins in division games (13) and take an early two-game lead over Kansas City in what should be a hotly contested AFC West. And, while Charles was beating himself up for being unable to execute the simplest play he’ll face this season, Jim Nantz burned him real good.