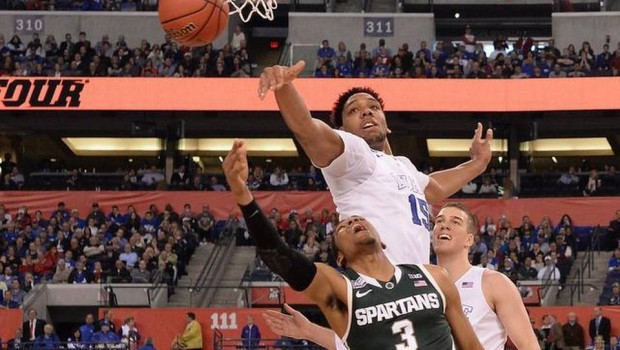 Jahlil Okafor, who may be the top pick in the 2015 NBA draft, finished with 18 points and six rebounds – right on his average.

By the time Duke coach Mike Krzyzewski turned to Nick Kelly and Nick Pagliuca, the Blue Devils’ two walk-ons, and told them to head to the scorer’s table, the game was essentially over.

Duke was 52 seconds away from an 81-61 victory against Michigan State in an NCAA tournament national semifinal, and the Blue Devils had called a timeout to take out their regulars and put in the walk-ons.

“In a game like that,” Kelly said, “you’re not thinking about whether or not you’re going to get in.”

Yet there he was in the final moments, the seconds ticking away; the Duke supporters in attendance rising to give a standing ovation; the Blue Devils wrapping up a victory that sends them on Monday night to the national championship game for the ninth time under Krzyzewski.

Kelly soaked in the scene before him. Yet the though that went through his mind the most, he said, was this: “Just about what’s next.”

That was the refrain inside the Duke locker room on Saturday night: what comes next. By then they didn’t know who they’d play on Monday night – whether it would be Kentucky or Wisconsin.

All they knew was that they were one game away from winning a fifth national championship under Krzyzewski.

“As a team, we don’t want this thing to end,” sophomore forward Matt Jones said.

For the first few minutes, at least, it appeared like Michigan State (27-12), which reached the Final Four as the No. 7 seed from the East Region, would test Duke’s might and will. The Spartans reached this point thanks to their defense and toughness and thanks, too, to the kind of magic coach Tom Izzo often works this time of year.

Izzo’s team started well enough and led 14-6 after four minutes. But then there was a timeout, and a moment inside the Duke huddle that Jones remembered long after it happened.

“Coach just told us that we were playing soft,” Jones said. “We forgot that they were a veteran-laden ball club and that they’ve been there before. So we just had to be more tougher.”

In the moments when the game changed – when Duke (34-4) went from losing to winning, then winning big – Duke benefited most from its defense. Michigan State made five of its first seven shots from the field – a start that included four 3-pointers, three of them from junior guard Denzel Valentine.

Duke outscored Michigan State 30-11 during the final 16 minutes of the first half. The Blue Devils led by double digits throughout the second half, and the 20-point margin of victory tied their largest lead of the game.

“Our kids, for the (last) 36 minutes they played lights-out basketball,” Krzyzewski said. “The defense was terrific. We drove the ball with such strength. I actually think our offense gave our defense a push in how hard we were taking it to the basket.”

The final 36 minutes might have been Duke’s finest stretch of the NCAA tournament. It was a time in which the Blue Devils made it look easy, though they said it wasn’t.

“Not at all,” freshman center Jahlil Okafor said when asked if victory came easier than he expected. “Not at all. Michigan State, they earned their right into the Final Four. They’re physical and tough, and they’re an older team.

“And they didn’t want their season to end just like we didn’t. So it wasn’t easy at all.”

Okafor, who earned ACC player of the year honors, finished with 18 points and six rebounds – right on his average. Justise Winslow, the freshman forward, continued his postseason emergence and finished with 19 points and nine rebounds.

Duke wasn’t always great – the first four minutes were proof of that – but for the majority of the game the Blue Devils overwhelmed the Spartans in every conceivable way. The second half lacked the kind of drama this tournament is famous for. There was no spirited Michigan State rally, no moment when Duke’s lead was in question.

Michigan State guard Travis Trice, who Krzyzewski earlier this week said was playing as well as any player in the tournament, finished with 16 points but those came quietly. Denzel Valentine, another of Michigan State’s most important players, scored nine points in the first four minutes but 13 during the final 36 minutes.

Krzyzewski signaled for his walk-ons to enter the game with about a minute to play and Duke called a timeout with 52 seconds left. And that’s how it ended, with the players who most often sit at the end of the Blue Devils’ bench on the court, running out the final seconds of a victory that sends Duke back into the national championship game for the first time since their victory in it in 2010.