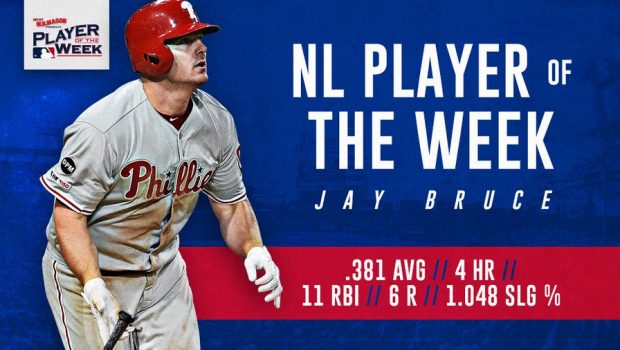 DUH! PHILS JAY BRUCE WAS NL PLAYER OF THE WEEK

Lost in the cannon fire emanating from Citizens Bank Park last night was the obvious news that Phillies left fielder Jay Bruce was named the National League Player of the Week.

The 32-year-old became the first Phillie in the modern era to slug four homers in his first four games with the team, according to Elias Sports Bureau.

He also became just the third player in the modern era with at least four dingers and 11 RBI through their first five games with a team, joining Reggie Sanders and Trevor Story, per Elias.

The Phillies haven’t had an NL Player of the Week since Cole Hamels in 2015 and Bruce is the first Phil to earn the honor in his first week with the team since Paul Byrd in 1998.

It was a wild week for Bruce for several reasons.

First, the Phillies acquired Bruce as a left-handed power bat off their bench and then Andrew McCutchen tore his ACL in the first inning last Monday.

With McCutchen’s injury, Bruce immediately became an important piece to the first-place Phillies and their new starting left fielder.

After last week, Bruce raised his overall batting average nearly 20 points (.231) and now has 14 homers and 39 RBI on the season.