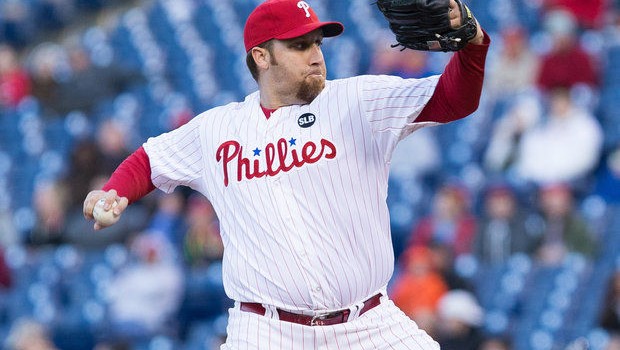 DUE RESPECT TO HAMELS, HARANG LOOKS LIKE ACE OF PHILLIES STAFF

It is an article of faith among Phillies fans that Cole Hamels is the ace of the pitching staff.

But what about Aaron Harang?

Harang allowed two hits, one walk and struck out six in eight scoreless innings Friday in a 1-0 victory over the Braves at Citizens Bank Park. Harang, who missed a couple starts in March because of a back issue, has a 1.37 ERA through four starts this season.

“It was the same thing last year,” Harang said, referring to a 0.85 ERA through his first five starts last season with Atlanta. “If you work fast in the count and try to get their guys to hit the ball early in the count, it’s going to keep the defense on their toes. I’m trying to get us off the field and back to the dugout to get the offense going.”Harang retired the first 10 batters he faced until he walked Braves second baseman Alberto Callaspo with one out in the fourth. Nick Markakis followed with an inning-ending double play.

He allowed his first hit in the fifth inning when A.J. Pierzynski doubled with one out. Chris Johnson followed with a single to put runners at the corners, but Harang got Andrelton Simmons to ground into another inning-ending double play.

“Playing with Simmons last year, he’s an aggressive player and wants to make something happen, so I used that to my advantage,” Harang said.

Harang praised Phillies catcher Carlos Ruiz for calling a good game. “Chooch and I were on the same page from the get go,” Harang said. “Everything he threw down was exactly what I was thinking. It was one of those fun nights where everything falls into sync and we’re both on the same page.”