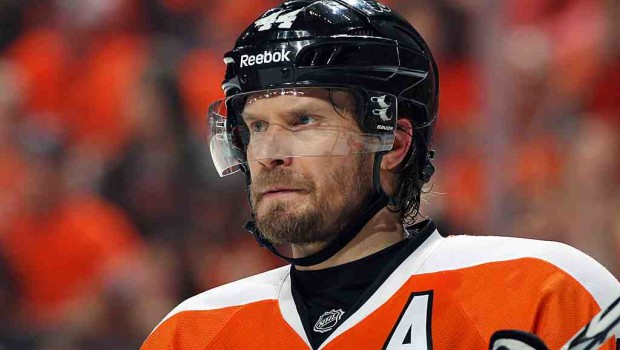 WITH ALL DUE RESPECT: FLYERS TAP THEIR STICKS FOR KIMMO

The Flyers were practicing at the Skate Zone yesterday, and all of a sudden Kimmo Timonen walked from the bench to the ice.

You could play in the NHL for a decade or longer and never witness what occurred Tuesday morning at Skate Zone.

As Kimmo Timonen walked from the bench onto the ice, his teammates stopped the practice session and began tapping their sticks on the ice in unison.

“The way the guys did it on the ice, it was cool,” said Timonen, who rejoined his Flyer teammates Tuesday for the first time since Game 7 (April 30) last spring against the Rangers in the playoffs.

Timonen, only recently cleared to return from blood clotting issues in his legs, said it will “take a good 10 days” before he can start thinking about resuming play, meaning both he and club are likely targeting a Feb. 28 game against the Rangers for his season debut.

It’ll be an important timeline to monitor.

The Rangers game could end up being the only game Timonen plays prior to the March 2 trade deadline and that’s key, because possible the Flyers could try and move him to a Cup contender as a show of gratitude for his service to the club.

The 39-year-old Finn has spent the last seven years in Philly and was a vital piece of the team that went to the 2010 Stanley Cup Final, scoring 11 points in 23 games while averaging 26:38 TOI per night.

That said, Timonen sounds excited about the possibility of returning to the playoffs as a member of the Flyers, who could draw to within four points of the final wild card in the Eastern Conference tonight with a win over Columbus.

“The guys are doing a great job and it’s only six points now,” Timonen said. “And [26] games to go … Every game matters. In two days, another game. You get focused again.

“You can’t look at the standings. You have to focus game-by-game. Take care of your stuff and hoping teams above you, lose.”