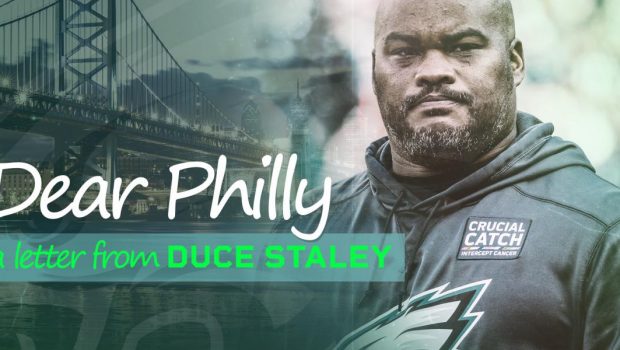 DUCE STALEY LOVE LETTER TO EAGLES FANS AS HE LEAVES FOR LIONS!

I want to thank all of you for welcoming me and allowing me to be part of your family for 7 years as a player and 11 years as a coach. Playing for and working for the Philadelphia Eagles and our fans has been the honor of my lifetime. I still remember like it was yesterday getting drafted and coming here in 1997 and playing for Ray Rhodes and then Andy Reid.

My first few years were tough in the win-loss column, but I knew we were on the verge of building something special. Sure enough, the first game of the 2000 season, the Pickle Juice game, brought a win over our divisional rival Cowboys and kicked off the start of a successful couple decades that only a couple of teams have been able to match in the entire National Football League. But of course, there would be periods of adversity along the way. I remember the pain, both emotionally and physically, of breaking my foot in the fifth game of that 2000 season. At that point the Lisfranc injury was considered career threatening. But as I started the rehab process I knew the chants of Duuuuucccceeee that would play in my head would power me to a full recovery.

The following season we got to the first of four consecutive NFC Championship Games. I’ll never forget my first carry on the opening possession of the 2002 NFC Championship Game. A 20-yard touchdown in the final game that would ever be played at the Vet. I thought I would get my first ring. Unfortunately, we all remember how that game ended. More disappointments would follow, but it would only make us stronger. That’s what I always loved about this city. We are tough and we are resilient and we want to work hard for everything that comes our way.

After finishing my playing career on the other side of Pennsylvania I knew I wanted to come back. Luckily, Andy made room for me on the coaching staff in 2010 and Chip Kelly kept me when he took over and made me the running backs coach and then Doug Pederson had me continue that role and ultimately serve as the assistant head coach. And after getting to the doorstep a number of times we finally did it after the 2017 season. I will never be more proud than helping an outstanding group of men and an outstanding organization of men and women bring our city our first ever Lombardi Trophy.

There are too many people to thank but I will just name a few. I have to start by thanking the Lurie family for believing in me both as a player and as a coach. I would like to thank my head coaches, Ray, Andy, Chip and Doug. I worked with some great fellow assistant coaches over the years and want to thank all of them, including Jeff Stoutland and Marty Mornhinweg. I loved every minute wearing this uniform and playing with great players like Hall of Famer Brian Dawkins, Brian Westbrook and Donovan McNabb. I loved every minute coaching all of our players, including my running backs from future Hall of Famers LeSean McCoy and Darren Sproles to Ryan Mathews to Super Bowl champions Jay Ajayi, LeGarrett Blount, Kenjon Barner, Corey Clement and Wendell Smallwood. More recently I have loved coaching Miles Sanders and Boston Scott, who I hope will bring this city another Super Bowl. If I start naming our other great players this letter will get very long, but I do want to thank DeSean Jackson, the best deep threat ever, and Jason Peters, the best left tackle of all time.

I would also like to thank the rest of our organization: Don Smolenski, Howie Roseman, Jake Rosenberg, Jon Ferrari and their teams. But these are only the names you might know. I also want to thank everyone that you don’t know but played just as important a role behind the scenes, including Greg Delimitros and our equipment staff, our strength, medical and sports-science staff and trainers, our in-house media and media relations team, Troy, Keisha and Peewee and the rest of our kitchen and cleaning staff, our video crew, and of course our legendary head of security Big Dom. (Dom, we all know you really run the place and I wish I could take you with me.) Frank Gumienny, I appreciate you and all our good conversations. Aileen Daly and Tina D’Orazio, you are the true bodyguards for the Eagles. Thanks also to Scott Jaudas, Joyce Inman, Kathleen Rosi, Katie David, Kathy Mair and Pat Dolan. All of you have helped me tremendously. And Catherine Raiche and Ameena Soliman, keep working, you are great and your time will come!

I am very sad to leave this great organization and city and fans, but I am looking forward to the growth opportunities that lie ahead despite the uncertainties. The way you embraced me, gave me the best nickname I’ve ever heard (Duuuuucccceeee), the way you expect the best from your athletes, the fact you deserve our best given what you’ve invested in us — all of this motivated me to reach heights I never thought possible growing up as a country boy in South Carolina that loved playing football more than I was necessarily good at it.

This has been an incredibly tough year for our fans dealing with issues like COVID and social justice. Regardless of where the rest of my career takes me, I will continue to lead from the front to help our community on these and other issues. While you know I will give my all to every team I have the pleasure to work for, you should also know I consider myself an Eagle for life. Best wishes to the best sports city of all time and never forget what we accomplished together. The grit and character of this city will allow you to accomplish even more going forward.