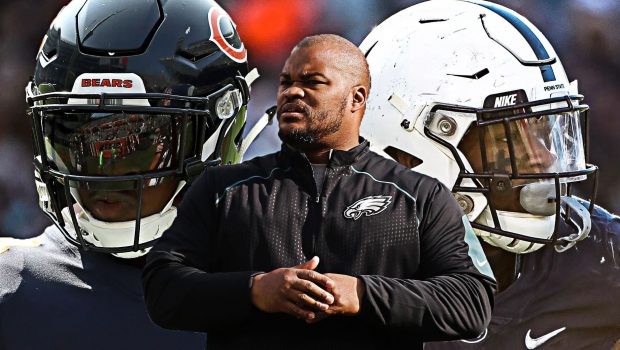 DUCE IS HIGH ON NEW EAGLES BACKS HOWARD AND SANDERS!

The first thing that Staley noticed about Jordan Howard after he was traded from the Bears was how quiet he was but shortly after noticed how much of a pro he also was, quoted by PennLive.com:

Howard is expected to play a big role this season but a lot of the buzz around the Eagles seems to be about what rookie Miles Sanders will be able to do. Sanders wasn’t much of a pass catching back during college, but Staley has been impressed how quickly he has improved catching the ball since joining the Eagles.

“I think he’s good. I think he’s good. I think that you talk to those guys, they’ll all tell you that … to get better, which you want those guys to think that way, be humble, especially when it comes to catching the ball and understand where to be. That’s one of my things as far as route running. You’ve got to understand the offense, and you’ve got to understand the progression of the offense, which is very important. And for those two guys to come in and kind of learn that rather quickly, I’m very pleased.”

The Eagles have a loaded running back room and there is a chance that four running backs could get snaps each game but with Staley’s comments and these two talents, they should be getting the first chances at reps heading into this season.