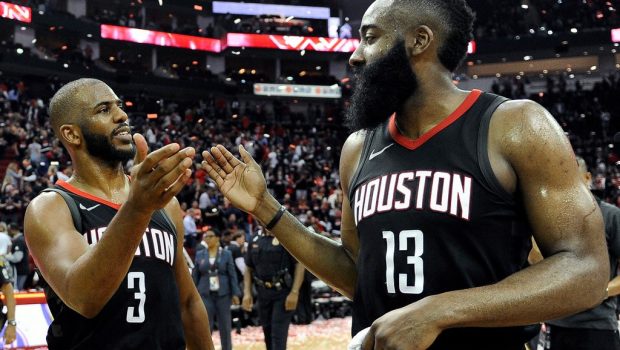 DUBS AND ROCKETS FINISH OFF SEMIS, READY FOR WEST FINALS!

As the Sixers prepare for game 5 tonight against the Celts for the right to play the Cavs in the East finals, the West is neatly wrapped up.

Chris Paul scored a playoff career-high 41 points with eight 3-pointers and the Houston Rockets defeated the Utah Jazz, 112-102, in Game 5 on to advance to face the Golden State Warriors in the Western Conference finals.

It will be Houston’s second trip to the conference finals in four years and the first ever for Paul. The point guard has been criticized for failing to get past the second round in his nine previous trips to the postseason.

Houston will meet Golden State after the Warriors finished off the New Orleans Pelicans.

Utah’s star rookie Donovan Mitchell shot 9 of 17 from the field and had 24 points for Utah before leaving with about seven minutes left with an apparent left leg injury.

Mitchell was injured when James Harden stole the ball from him and capped an 11-5 Rockets’ run with a dunk that gave Houston a 92-87 lead. Mitchell grabbed his left leg on the play. He had to be helped to the bench and was quickly taken to the locker room with the help of two people.

Paul, a nine-time All-Star in his first season with Houston after an off-season trade from the Los Angeles Clippers, also had 10 assists and seven rebounds.

WARRIORS 113, PELICANS 104: Stephen Curry, in just his fourth game back from injury, led the Warriors with 28 points in Golden State’s win over New Orleans, which secured the Warriors their fourth consecutive appearance in the Western Conference Finals. Kevin Durant had 24 points, Klay Thompson had 23 and Draymond Green just missed a triple-double with 19 points, 14 rebounds and 9 assists. The Warriors raced to a huge lead in the third quarter, but had to survive an 18-2 run by the Pelicans in the fourth quarter. Anthony Davis finished with 34 points for New Orleans.

Winners of two of the last three NBA titles, the Warriors will have their hands full with the Rockets, who broke Golden State’s run of three straight years as the No. 1 seed in the Western Conference.