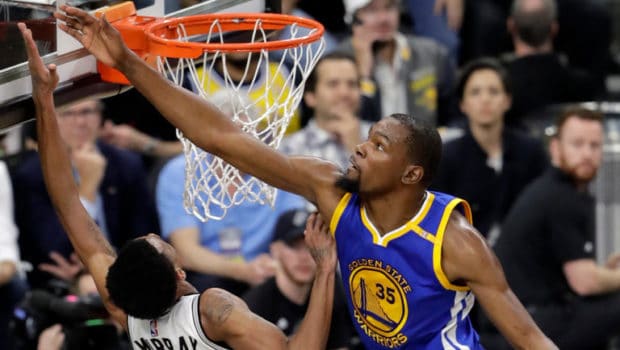 The Golden State Warriors rolled past the San Antonio Spurs, 129-115, to complete a sweep in the NBA’s Western Conference finals.

The Warriors, who advanced to their third straight finals, became the first team in league history to start the playoffs with a 12-0 record and have not lost since April 10, their next-to-last game of the regular season.

Golden State will face the Cleveland Cavaliers or the Boston Celtics in the NBA finals, starting June 1. The Cavaliers, the defending champions, have a 2-1 lead against the Celtics in the Eastern Conference finals.

Stephen Curry led Golden State with 36 points and Kevin Durant (above) had 29 points and 12 rebounds. The Warriors led by 14 at halftime, and never by fewer than double figures the rest of the way.

The Spurs finished the regular season with the league’s second-best record behind the Warriors and figured to at least pose a challenge. But their hopes began fading in the first game of the series when Kawhi Leonard, their best player, landed awkwardly on the left foot of the Warriors’ Zaza Pachulia. Leonard was lost for the series with a sprained ankle.

San Antonio was already trying to cope with the absence of its starting point guard, Tony Parker, after he sustained a season-ending quadriceps injury in the conference semifinals. The loss of both players was clearly too much for the remaining Spurs to overcome, especially against an opponent as fearsome as the Warriors.

The Warriors have won their last 10 games with Mike Brown as acting coach on the bench. For medical reasons, Coach Steve Kerr stepped away from his day-to-day duties in the first round, although he has been around the team in recent weeks, offering pep talks at practice (and in the locker room at halftime) and dissecting film.