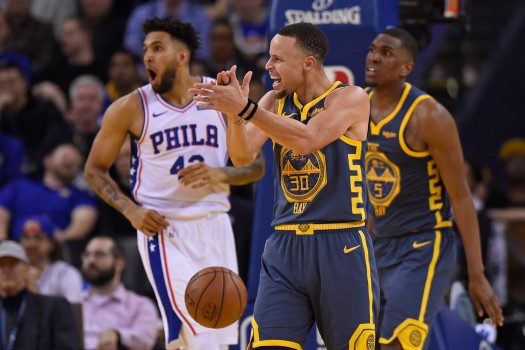 Steph Curry banged home five 3-pointers and 28 points to rally the Golden State Warriors to a 120-117 win over the Sixers at rhew Wells.

The Warriors squashed Philly’s upset bid in front of a sellout crowd that included plenty of Eagles and the first appearances of Phillies Bryce Harper jerseys. Curry buried a 3-pointer for a 111-109 lead, the Sixers tied it, then Curry scored the next six points over the final 2:35 of the game to do what he does best — carry the Warriors in the clutch.

“We’re getting on this six-hour flight with smiles on our faces,” Curry said. “These feel good, these games where you figure out how to win in a playoff atmosphere.”

The Sixers had one last shot to at least tie but Tobias Harris lost the ball out of bounds with 1.7 seconds left. It was the final fumble in a series of miscues down the stretch, including Ben Simmons missing the rim on an intentional miss at the free-throw line.

“I think there is a little bit of confusion because we have a whole new team and we’re trying to get guys in places,” Simmons said.

Each team played without a franchise star: 76ers center Joel Embiid missed his fifth straight game with a sore left knee. Embiid, averaging 27.3 points and 13.5 rebounds in 54 games for the Sixers, said he expected to return next week. Golden State’s Klay Thompson sat out with a sore right knee suffered in Thursday’s loss at Orlando.

Without Embiid, Mike Scott scored 22 points and was a surprise star for the Sixers, until he botched a late intentional foul that gave Golden State life. Simmons had his second straight triple-double and 22nd of his two-year career with 25 points, 15 rebounds and 11 assists. He also had nine turnovers.

Curry picked up his fourth foul with 8:15 left in the third and sat the rest of the quarter.

“It was disappointing just because he got himself vulnerable,” Warriors coach Steve Kerr said. “We need him out there, especially with no Klay. I think he knows that and he was kind of disappointed in himself.”

The game got wild without him. Damion Lee , former star at nearby Drexel, hit a pair of 3s in Curry’s absence that kept it a one-point game. Considered a throw-in as part of the Harris trade with the Clippers, Scott hit a pair of 3s that stretched Philly’s lead to five.

Golden State’s stars put them ahead to close the quarter. Durant hit a step-back jumper and Iguodala, the once-popular former Sixer, connected on a 3 for a 93-90 lead to close the third.

Curry took over for the Warriors in the fourth.

“He’s the second-best point guard ever. Argue that,” Iguodala said.