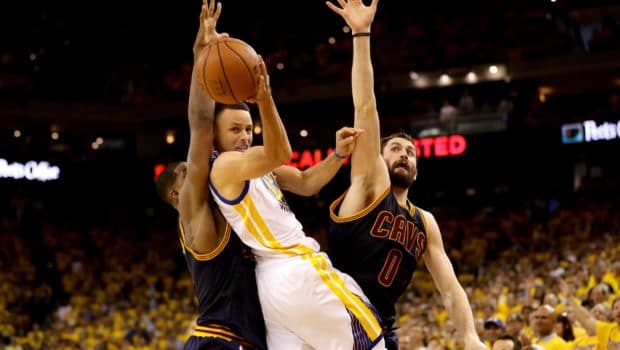 The most startling thing about the Golden State Warriors’ comfortable 2-0 advantage over the Cleveland Cavaliers in the 2016 NBA Finals has been the relatively minor statistical impact of Splash Brothers Stephen Curry and Klay Thompson, neither of whom has scored 20 points in either of these first two games.

Although the greatest shooting duo in NBA history performed better in last night’s 110-77 blowout than they did in Thursday’s bench-driven victory, the record-setting Warriors continued to rely far more on a terrific defensive effort, superior depth and a ream of matchup advantages to put the Cavaliers into a very tough 2-0 hole. The Warriors’ ability to thrive without dominant showings from the unanimous MVP and a no-doubt All-Star hasn’t been impressive merely as it pertains to other players stepping up, but because Curry and Thompson haven’t even felt especially missed.

For Curry, the fact that neither he nor Thompson has had to go on a hot shooting run speaks to what has made Golden State so excellent throughout this season.

“Everybody falls in love obviously with how me and Klay shoot the ball, and that’s a big part of what we do, and having success over the course of the season in a playoff run, you need to have that punch,” he said. “But you look at the stat sheet and look at some names that jump off, whether it be Shaun [Livingston], L.B. [Leandro Barbosa], Andre [Iguodala], H.B. [Harrison Barnes], obviously Draymond [Green] — what he did tonight offensively, that’s huge. But it’s the little stuff that you don’t see on the stat sheet that has gotten us to this position. … That’s where you become a consistent team.”

If it seems like Curry named nearly every player who suited up for Golden State, that’s because most of them were indeed very effective. Backup center Festus Ezeli was the only man who saw more than 10 minutes of playing time to finish with a plus-minus under a positive-10, and only four of his minutes came before garbage time. Both Curry (18 points on 7-of-11 FG and 4-of-8 3FG) and Thompson (17 points on 6-of-13 FG and 4-of-8 3FG) did their parts to further the cause, but the Warriors won this game because virtually every key player was solid.

That consistency throughout the lineup was most evident at the defensive end, where the Warriors dismantled a Cavaliers attack that steamrolled the three opponents that tried and failed to stop it during the Eastern Conference playoffs. Cleveland shot 35.4 percent from the field and 5 of 23 from deep, stats that were all the more concerning for not falling especially short of what the team accomplished in the Game 1 loss. There haven’t been any real bright spots, either — Richard Jefferson is the only rotation player to have shot at or better than 50 percent from the field in the series so far (4 of 6 in Game 2). LeBron has gotten his stats only marginally more efficiently than he did in last June’s one-man show against Golden State, and Kyrie Irving and Kevin Love have been offensive minuses on top of their well-established defensive frailties in this matchup.

The Warriors, to a man, explained their high-level defense on LeBron and others in relatively simple terms.

“We just tried to be as active as possible,” said head coach Steve Kerr. “We have a lot of speed on our team and like-sized players who we can kind of help and recover and switch. … And I just thought our guys did as good a job as we possibly could in terms of trying to cover [LeBron] in penetration and stay with shooters at the same time.”

The execution of that game plan has been somewhere close to flawless. Defenders have switched screens, closed driving and passing lanes, and closed out on shooters to make every possession a chore. Much has been made of the Warriors’ versatility in the past two years, but this matchup with the Cavs expresses it better than any other. Golden State has shut down most of Cleveland’s usual avenues to shot creation, and no one has offered an adjustment that works. Even if they do, there’s a decent chance the Warriors will be able to figure it out with all the quality defenders on hand.

Yet Kerr has not claimed the Cavs matchup solved even after seven straight convincing wins running from last season’s Game 4 on through the 2015-16 regular season and into this series. In fact, he promises that the Warriors aren’t settling in against the Cavs and their superstar.

To put it another way, Golden State is confident enough in its own strengths to believe that a majority of possessions against James and Cleveland’s other offensive threats will go its way and create opportunities to score at the other end, whether in transition or via half-court sets. That plan obviously worked on Sunday, with Draymond Green providing the biggest offensive impact with 28 points while making a playoff-career-high five 3-pointers. While Green is an All-NBA talent acknowledged as the engine of the Warriors’ elite versatility, his hot shooting made this offensive performance arguably just as surprising as Livingston’s team-high 20 points on Thursday.

The biggest factor in Game 2’s one-sided score was that Green ended up as just the biggest scorer among a crowd of effective players. The bench numbers were stellar again even prior to the final-skewing fourth quarter — four players combined to go 8 of 12 from the field for 17 points, a number that would have far outstripped the Cavs’ reserve contributions if not for the stellar play of Jefferson (12 points on 4-of-5 FG at that same point). Even those players who didn’t put up notable point totals, like, starters Andrew Bogut and Harrison Barnes, made positive offensive decisions.

The team-wide play was so strong that Curry and Thompson registered more as particularly dangerous cogs than linchpins. (Curry even sat for long stretches of the game’s two deciding runs in the second (20-2) and third (17-7) quarters.) Yet that description doesn’t minimize their impact as much as it communicates how much was going right. They are dormant stars, not struggling ones, and it figures that they will play bigger roles as the series moves to Cleveland for Wednesday’s Game 3.

As of right now, the Warriors look like considerable favorites. Kerr and his players all stressed the need to temper expectations in the aftermath of the blowout win and pledged they will not get ahead of themselves. They seem to have studied recent history. This postseason has already provided plenty of examples of teams that can respond to blowouts with series-shifting wins — just look at Golden State against the Oklahoma City Thunder in the conference finals, or the Thunder vs. the San Antonio Spurs in their prior series.

At the same time, it’s necessary not to undersell what has happened in these two Warriors wins. Though not without faults — 20 turnovers in Game 2, for instance — the Warriors have gotten better shots, limited the Cavs’ quality looks, and generally been the better team in every aspect. That’s not necessarily a preview of the rest of the series, but it’s not an accident either.

To call that a product of excellent depth feels inadequate, just as it seems silly to rely on the usual post-game platitudes about differences in effort and focus. The Warriors have clearly been the better team even as the Splash Brothers have appeared quite mortal — a scenario perhaps only they can transcend. Perhaps the role players will struggle in Cleveland, but it would not be a surprise to see Curry and Thompson return to prominence in Games 3 and 4.

“The crazy thing is we can all play better,” said Curry in assessing the blowout victory.

High-level athletes and coaches profess the need for continual improvement as a matter of course. What’s frightening this time is that, as good as the Warriors have been, the MVP’s statement feels true.