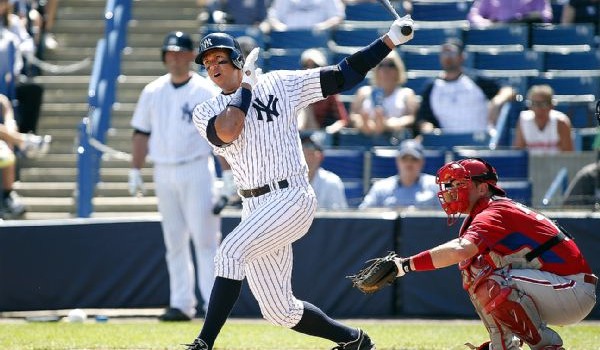 The Phillies knocked off the Yankees 3-1 Wednesday, but the Big Story on Action News was:

Alex Rodriguez’ return from his year-long suspension for being a drug cheat.

Nearly a year and a half had passed since Rodriguez, who missed all of last season while serving a suspension after a performance-enhancing drug scandal, had played in a game, so it was easy to understand how eager he was for his first plate appearance of spring training.

Rodriguez, who had acknowledged that he was jittery, soothed his nerves by lining a two-strike single to left field in his first at-bat Wednesday afternoon. Rodriguez, in the Yankees’ lineup as the designated hitter, also grounded out before he was removed for a pinch-runner.

When Rodriguez, who batted second, strode to the plate in the first inning, he was greeted loudly — mostly with cheers but also with some noticeable jeers by the announced crowd of 9,673 at Steinbrenner Field.

Rodriguez swung at the first pitch he faced, a 91-mile-per-hour fastball from the right-hander Kevin Slowey, and missed badly.

“I felt like I was swinging underwater,” Rodriguez said. “Man, it’s been a long time.”

He swung through another fastball to find himself in a quick hole. But after he stepped out of the batter’s box with one foot to regroup, he laced a line drive into left field off another fastball.

“I told him, ‘Welcome back,’ ” Ruf said. “And he said, ‘Thanks,’ and told me to say hi to Chase,” referring to the Phillies’ longtime second baseman, Chase Utley.

It was those interactions, the kind he was deprived of last year, that Rodriguez seemed to relish Wednesday. He said he told the home-plate umpire, Tom Hallion, and Phillies catcher Tommy Joseph “to take it easy on the old man” when he first came to the plate. Later, Rodriguez sat on a folding chair outside the dugout near the on-deck circle and chatted with the Yankees’ third-base coach, Joe Espada, and Reggie Jackson, who is in camp as an instructor.

In his second at-bat, Rodriguez again made solid contact, grounding a first-pitch fastball from Paul Clemens to shortstop for a forceout that ended the third inning. He came to the plate in the sixth inning with runners at the corners and the Yankees trailing, 2-0. After he took a 3-2 curveball for a walk, he was replaced by pinch-runner Kyle Higashioka.

In the opposite dugout Wednesday, Larry Bowa, who was with the Yankees in Rodriguez’s first two seasons with the team, said he was uncertain it could be any other way.