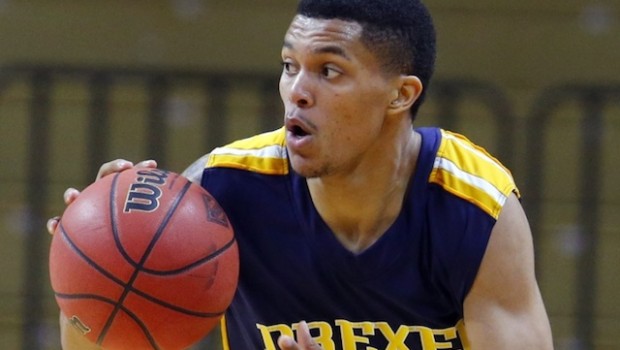 BRUISER FLINT RETOOLS DREXEL TO COMPETE IN THE CAA

Damion Lee’s return from ACL surgery will give the Dragons a big boost.

Drexel started quickly last season, losing only to UCLA and Arizona, and beating Rutgers, Alabama and Davidson. But then injuries hit and the Dragons ended up a disappointing 8-8 in CAA play.

Who’s Out:
Chris Fouch, Frantz Massenat and Dartaye Ruffin were the only players to start more than 18 games last season. Everything revolved around those three. Fouch was the leading scorer, with 18.3 points per game, and the most prolific outside shooter. Massenat added 17.5 points and dished out 4.7 assists per contest. Ruffin was never much of a scorer, but he was the team’s best rebounder and a solid defender in the paint. Unfortunately, Kazembe Abif has already been hit by the injury bug again. He missed nearly half of last season with a couple of injuries and now is likely out for the 2014-2015 campaign. His size and rebounding will be missed on this inexperienced squad.

Who’s In:
Flint has brought in four newcomers who will all compete for minutes. Rashann London and Sammy Mojica will add a couple much needed options on the perimeter. This team needs a new shooter and somebody who can score off of the bench and Mojica has the potential to be that guy. Tyshawn Myles and Austin Williams are the newcomers in the frontcourt. Miles, at 6-8 and 260 pounds, is the one to watch for now, especially with Abif out. He may not be much of an offensive threat yet, but he can eat up a lot of space in the paint on both ends of the floor.

Who to Watch:
It will be very interesting to see the backcourt/frontcourt dynamic of this team. The Dragons traditionally have strong play on the perimeter and often skip right over the big guys on offense. Without Fouch and Massenat, the strength of this team is in the frontcourt and we should see a much bigger lineup than in years past. But will the new starting guards feed the big men effectively? Rodney Williams, a 6-7 forward, started 18 games as a freshman and showed plenty of potential. He didn’t look to shoot too often, averaging just 5.4 points per game, but he is an efficient interior scorer and a strong rebounder. Mohamed Bah, another sophomore, has limited experience and will be pushed by Myles, a similar big-bodied forward. Damion Lee is technically a guard, but his versatility has allowed Coach Flint to move him around. Lee, a 6-6 junior, played just five games in 2013-2014 before a torn ACL ended his season. Two years ago he averaged 17.1 points and 5.1 rebounds and those are the kind of numbers that he will have to put up this year if Drexel has any hope of reaching a postseason tournament.

Final Projection:
Major Canady, Travon Allen and Freddie Wilson have the unenviable job of replacing Fouch and Massenat. Canady is a big 6-4 guard who did start 14 games as a freshman. He is not going to score much, but if he can do a decent job finding his teammate and keeping the turnovers down, that will be enough. Allen averaged 11.7 points per game contest, but was terribly inconsistent with his shot. Somebody on this team must start knocking down three-pointers and Allen is the best returning option. If that happens, and the injuries stop now, Drexel will be able to compete in a relatively weak CAA.