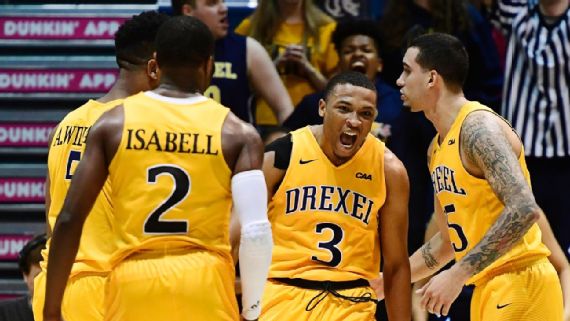 Drexel’s basketball team made history last night at the Daskalakis Center on its campus:

The Dragons set a men’s Division I record for a comeback win, overcoming a 34-point first-half deficit to beat Delaware 85-83.

“Our approach at halftime was, let’s make it happen,” Drexel head coach Zach Spiker told ESPN by phone after the game. “Look, this has a chance to be the craziest comeback, a perfect storm. We turned it over, we came out soft. The opposite happened in the second half.”

“They shot almost perfect from the 3-point line,” Drexel guard Tramaine Isabell said. “He told us it could happen the exact opposite way.”

“We try to get bricks, which is three straight stops,” Isabell said. “Those started coming to us, in bunches. [The coaches] just kept screaming at us at timeouts, whatever the run was. 17-2, 8-0. After you hear that a couple times, you [start thinking], ‘We were just down 25 points seven minutes ago, maybe this is possible,’ and we just made history.”

Isabell finished with 29 points, 12 rebounds and 9 assists — scoring or assisting on 38 Drexel points after halftime. He scored 27 of his 29 points in the final 22:30 of the game.

“I missed a lot of easy ones in the first half, just told myself to calm down,” Isabell said. “We were down 17, I tried to force the issue a little bit. Just needed to pick my spots and let the game come to me. Be aggressive, but smart. I tried to do that.”

Drexel took a two-point lead with 1:55 left on an Isabell jumper and then again with 1:13 left on a tip-in from Austin Williams. But Delaware answered both times, including a Ryan Daly jumper with 10 seconds left to tie the game.

On Drexel’s final possession, Isabell was fouled shooting a 3-pointer with 2.2 seconds left and buried two of the three free throws to win.

“I just felt like, I don’t know. I didn’t believe it,” Isabell said of the comeback. “That’s something amazing to be part of. I can’t imagine having a team down 34 and making us believe we could come back.”