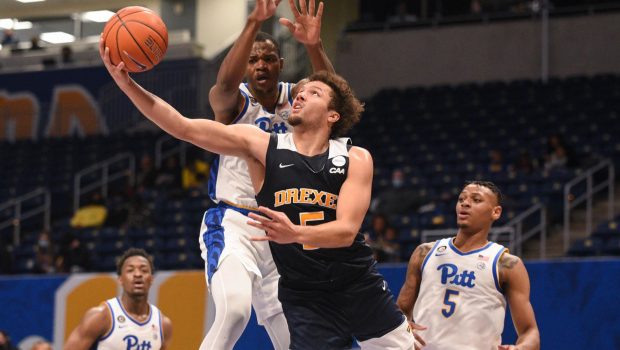 DREXEL BREAKS THROUGH AGAINST QUINNIPIAC IN BUBBLEVILLE!

Drexel went on a 14-0 run late in the first half and never looked back on its way to a convincing 66-48 win against Quinnipiac at Mohegan Sun on last night.

The Dragons picked up their first victory of the season (1-1) and had one of their best defensive efforts in recent memory. They held the Bobcats to just four field goals in the first half and cruised to victory in the Air Force Reserve Hall of Fame Tip-Off.

The outcome was never in doubt in the second half. Quinnipiac couldn’t cut the lead to under 14 points after intermission. Drexel knocked down seven three-pointers and shot 44 percent from behind the arc in the game. They defended the three well the entire night. The Bobcats didn’t make a three-pointer the entire first half and finished the game just 1-for-12 from long range. Defensively, Drexel took Quinnipiac out of their game from the outset. The Bobcats turned the ball over 17 times, which led to 22 Drexel points.