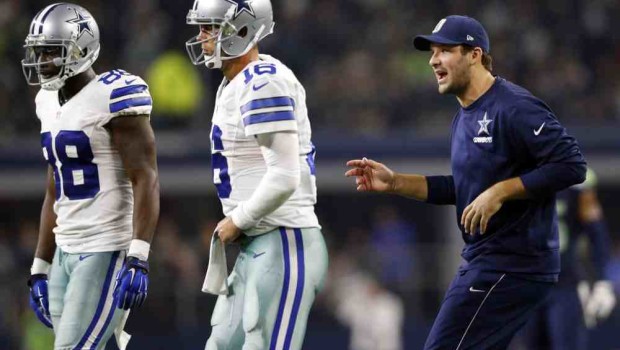 QB Tony Romo (right) will be coming back soon, but it may be too late for the reeling Cowboys.

The Eagles were off with a bye yesterday, so in the Philly region their competitors for the NFC East title were on full display on national television and:

The New York Giants lost to the New Orleans Saints 52-49 in a game that brought back memories of the old American Football League, which played no defense; and

Despite the better efforts of the Seattle Seahawks to keep the reeling Dallas Cowboys in the game — including Russell Wilson throwing a ball directly into Greg Hardy’s arm, Marshawn Lynch failing to stay in bounds late in the game (which would have essentially ended the game) and Michael Bennett inexplicably lunging toward Matt Cassel’s knees and getting a deserved personal foul on the first play of what would be Dallas’s final drive — the reigning NFC East champs fell to the reigning NFC champs, dropping to 2-5 and coming perilously close to being out of contention by the time the injured Tony Romo returns in Week 11.

They will be, maybe not mathematically, but realistically.

With the Giants’ brutal loss at New Orleans, the NFC East is still wide open, meaning Dallas has a better chance than normal with its less-than-pedestrian mark through seven games. If Dallas can eke out at least one win in its final two Romo-less games (they’re 0-5 without him) then a 3-6 record will give the ‘Boys a sliver of a chance to make the playoffs. (If Dallas can go 2-0 in the Romo-less games with Philly and Tampa then things change, but there’s no reason to expect that.)

Only four teams since the 1990 playoff expansion have gone from 3-6 to the playoffs, with the 2012 Washington Redskins being the last. Three of those teams won out — a seven game win streak — to make the playoffs, One, the 1996 Jacksonville Jaguars, went 6-1 down the stretch and finished 9-7. (Interestingly, those 2012 Redskins had to beat the Cowboys twice during their run, including in a Week 17 de facto NFC East championship game. Dallas has two more games against Washington this year including in Week 17.)

So it’s not all doom and gloom for Dallas. The good news is that when a division is as mediocre as the NFC East, it may not take a 10-6 or 9-7 record to make the playoffs. In last year’s NFC South the Carolina Panthers were actually 3-8-1 before winning out to finish 7-8-1 and take the worst division in NFL history.

But the NFC East isn’t as bad as last year’s NFC South. Though there’s a reasonable chance an 8-8 team wins the division, odds are that at least one team somehow stumbles upwards to a 9-7 mark. The Giants have given away three of their four losses in the final two minutes. Washington isn’t a great team, but has defeated the Eagles and upstart Rams. And Philly can’t be this bad, can they?

The schedule doesn’t do Dallas any favorites. Romo’s first game back would be a home game against Miami. Then it’s vs. Carolina, at Washington and at Green Bay, a three-game stretch that’s almost certain to save the Cowboys season or end it. There’s also a trip to Buffalo in late December and another game against the Redskins, who came into Dallas last year in a complete mismatch and still came away with the win.

If, if, if, if. There’s a ton that needs to fall into place to save the Dallas Cowboys season. It’s not impossible, but it’s not probable either. The sun is setting and Sunday was the NFL’s equivalent of falling back. It’s getting late pretty quick in Big D.

The NFC East hasn’t had a repeat champion since 2004. That streak is going to continue in 2015.