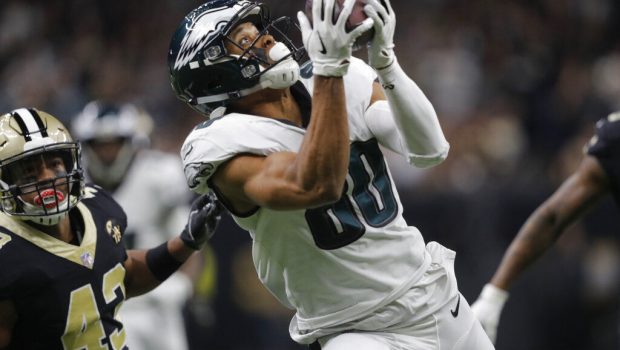 Nobody ever said legalized sports betting would be flawless.

DraftKings sponsored a national sports betting handicapping contest with a $2.5 million prize pool, and it ended in controversy after the Day 3 leader was prevented from making his final wager before the NFC divisional-round game between the Eagles and New Orleans Saints kicked off.

A contestant with the username rleejr86 ended up winning the first DraftKings Sports Betting National Championship instead, grabbing the $1 million first prize with a final bet of $47,500 on the Eagles +8.5.

The Saints won 20-14, but the Eagles covered the spread, boosting rleerjr86’s bankroll to a contest-winning $101,474, according to ESPN.

More than 200 bettors from different parts of the country entered the $10,000 buy-in contest and combined to wager more than $5 million during the three-day event that was headquartered in Jersey City.

However, it was the bets that couldn’t be placed by the leader before the final game in the contest kicked off that were the source of dispute.

Professional sports bettor Rufus Peabody, competing under the username Opti5624, was leading the contest heading into the Eagles-Saints game, with a nearly $82,000 bankroll that he compiled after winning an all-in wager on the New England Patriots -3.5 against the Los Angeles Chargers in Sunday’s AFC divisional-round game. The Patriots won 41-28.

The high-scoring AFC affair ended at 4:37 p.m. ET, just four minutes before the Saints game began. Peabody told ESPN he repeatedly refreshed his browser during those four minutes, waiting for his winnings from the Patriots bet to be credited so he could make what he says would have been one last all-in bet on either the Saints at various point spreads or under 52 points.

The only problem? His winnings weren’t credited to his account until after the NFC game kicked off. He was locked out of making his final bet.

“I had spent the last 2.5 hours running over all the numbers,” said Peabody, the co-founder of football analytics site Massey-Peabody and a former ESPN employee. “And, as it goes at the end, I was going back and forth: ‘Which one am I going to do? Am I going to pull the trigger?’ It was going to be a Saints bet of some kind or the under. Unfortunately, I didn’t get the chance.”

According to data posted on the DraftKings’ website, some players were credited their winnings from the Patriots game before Peabody, allowing them to get their final bets in before the NFC game started. Several other contestants also didn’t get their bets from the AFC game credited in time to make final play on Eagles-Saints. On Sunday, the final day of the contest, bettor were allowed to wager only on the two NFL divisional-round playoff games. No more bets were allowed after the NFC game began.

Peabody posted a screenshot to social media of his DraftKings contest account with a $0.01 balance and the time on the computer showing 4:41 p.m., right as Eagles-Saints kicked off.