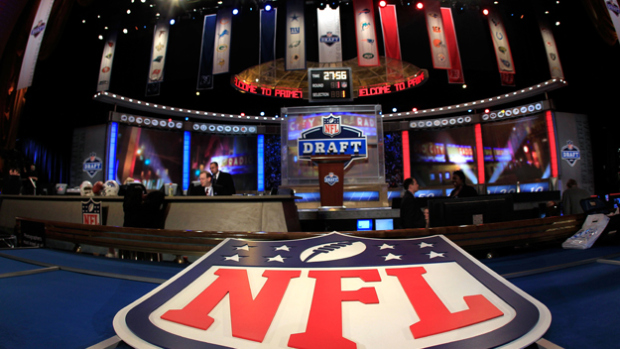 Analysis: The Chiefs and Eagles are ideal trade partners; the Chiefs don’t have a first-round pick but do have extra mid-round picks, while the Eagles don’t pick in the second or third round. The Chiefs use this pick to get Patrick Mahomes another big target.

Analysis: Everyone knows the Browns will take a quarterback, but few people know which one. Josh Allen, with his huge arm, is enticing. So are Josh Rosen’s confidence and Baker Mayfield’s swagger and playmaking ability. But the Browns go with the safest, cleanest prospect in Darnold, who should take over for Tyrod Taylor by midseason.

Analysis: The Giants want to win now with Eli Manning, so taking a quarterback this high would just put the rebuilding process into motion. Saquon Barkley is tempting, but this is a deep running back class. The G-Men need a replacement for Jason Pierre-Paul, and take the best pass rusher in the draft.

Analysis: The Jets really want Darnold, but they’ll happily settle for Mayfield in this spot. Mayfield is undersized for the position, but his college production was off the charts, his dynamic playmaking will be a huge hit in New York, and the fans will like his brash attitude as well.

Analysis: With Darnold in pocket, the Browns trade the fourth pick to a quarterback-desperate team. The Cardinals make their move, trading the 15th pick and next year’s first-rounder to move up and draft Rosen, a classic pocket passer who should be ready to start right away.

Analysis: The Broncos need an infusion of youth on defense, and of course QB Josh Allen is still on the board. But instead they choose to beef up their run game and add weapons around Case Keenum. And they don’t come any better than Barkley, the best pure talent in the draft.

Analysis: The Colts are undergoing a total rebuild and have needs up and down the depth chart. LB Roquan Smith is intriguing, but they instead go with Fitzpatrick to replace Vontae Davis. Fitzpatrick gives them a defensive cornerstone who can play outside, slot, and safety.

Analysis: The Bucs would be thrilled if Barkley drops to them at 7, but that doesn’t seem likely. Jameis Winston needs better protection, and Bucs GM Jason Licht races to the podium to draft Nelson, a three-year starter and the cleanest offensive line prospect in the draft.

Analysis: The Bills remain patient as three QBs go off the board in the first four picks, and find a way to trade up for Allen without dealing both first-round picks. Allen and his big arm will do well in Buffalo, where he will have to deal with the elements.

Analysis: The 49ers need to beef up their defense after spending resources on the offense in free agency. A young cornerback is tempting, but they suddenly might need a new middle linebacker considering Reuben Foster’s legal situation. They need a linebacker anyway, and Smith is a solid addition.

Analysis: The Raiders will be churning a lot of the roster under new coach Jon Gruden, and they could stand to get Derek Carr more weapons. But Edmunds is too good to pass up, offering a rangy, athletic, and versatile three-down linebacker as the new centerpiece of the defense.

Analysis: The Dolphins aren’t quite ready to give up on Ryan Tannehill, so they don’t make a play for Lamar Jackson or any other quarterback. They would race to the podium if Edmunds were available. But he isn’t, so they add another talented cornerback to their shaky secondary.

Analysis: The Bears are starting over with a new coaching staff, and need help up and down their defense. They start by beefing up their pass rush with Landry, a speedy edge rusher who should fit well into the rotation as a 3-4 outside linebacker.

Analysis: The Redskins seem like a candidate to trade down because the board doesn’t necessarily meet their needs here. But they could definitely use a young cornerback to pair with Josh Norman, and they go with Jackson, who had eight interceptions and was a first-team All-American last year.

Analysis: The Packers are going young under new GM Brian Gutekunst, and definitely could get Aaron Rodgers another weapon. But they also need front-seven help, and Davenport is a physical specimen who can learn for a year under Clay Matthews.

Analysis: The Browns have a sizable hole at nose tackle after trading away Danny Shelton, and fill it with Vea, who has freakish strength and athleticism and can immediately be a first- and second-down player in Cleveland.

Analysis: Joe Flacco still has four years left on his deal, but I can’t shake the thought that the Ravens will make a play for Lamar Jackson. But they desperately need receivers, even after signing Willie Snead, and GM Ozzie Newsome likes his Alabama players.

Analysis: The Chargers have a bigger need for an inside linebacker, but they also could use a young, physical safety, and James is too tempting to pass up. He can play center field or cover tight ends, and can even play linebacker.

Analysis: Last year, Kansas City was the team that came out of nowhere and made a big play for Patrick Mahomes. Now it’s the Saints, with Drew Brees at 39, making the move for their quarterback of the future, trading next year’s first-rounder to Seattle.

Analysis: The Cowboys could use more secondary help, and a young tight end to groom under Jason Witten. But they have a hole at right tackle, even after signing Cam Fleming, and fill it with the best prospect in the draft.

Analysis: The Lions are remaking their defense under Matt Patricia, and need help at the edge and the secondary. They called Malcolm Butler during free agency and could always use another cornerback, and they pick up talented but troubled Mike Hughes.

Analysis: The Bengals need help in the trenches, much more so on the offensive line, where they have a gaping hole at center. Price makes too much sense, a four-year starter at center and guard from nearby Ohio State.

Analysis: After landing their quarterback, the Bills wrap up their successful draft by taking Evans, a versatile linebacker who will replace Preston Brown and add even more speed to Sean McDermott’s impressive defense.

Analysis: The Patriots need an offensive tackle, and the quarterback conundrum is there. Instead they fill an immediate need with Vander Esch, a tackling machine and three-down linebacker who would be a higher pick if not for injury concerns.

Analysis: The Panthers need a young pass rusher, a young cornerback, and some offensive line help. But with Devin Funchess and Torrey Smith as the top two receiving options, they need to get Cam Newton another weapon. Moore is a physical receiver in the mold as Steve Smith.

Analysis: The Titans really could use linebacker help — both inside and at edge rusher – and don’t be surprised to see them trade up. But in this scenario, with the top edge rushers off the board, they beef up their offensive line with Hernandez.

Analysis: The Falcons could use a couple of young weapons for Matt Ryan, and definitely need another edge rusher. But the offensive line always can be improved, and Ragnow was a three-year starter and a plug-and-play at right guard or center.

Analysis: The Seahawks still don’t have a second- or third-round pick, so don’t be surprised if they trade down again. But if not, they fill a big need at running back with Guice, a powerful runner in the mold as Marshawn Lynch.

Analysis: They badly need an inside linebacker to replace Ryan Shazier, and don’t be surprised to see the Steelers make a trade up for one of the top prospects. But they could always use another cornerback, and Alexander returns punts, too.

Analysis: The Jaguars could use more weapons for Blake Bortles, and they could definitely use a tight end to supplement Austin Seferian-Jenkins. But they also have a need for a penetrating defensive tackle, and Hurst gives them a dominant interior pass-rushing presence.

Analysis: The Vikings could use improvements on the offensive line, and will consider several of the tackle prospects still available. But they might as well get Kirk Cousins another weapon, and Goedert is a terrific receiver and adequate blocker.

Analysis: Again, it’s tempting to consider a quarterback here, with Oklahoma State’s Mason Rudolph our choice. But the Patriots badly need a left tackle, and Miller is the choice because of his massive 6-8 frame. The Patriots like big tackles (Nate Solder also was 6-8), and Miller is the only top prospect with the requisite size.