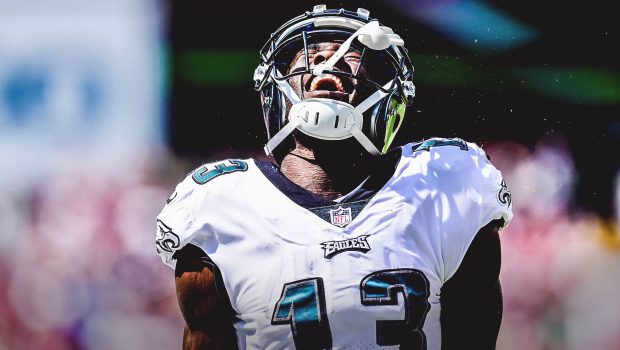 Tonight is the NFL draft, and I wouldn’t put it past Eagles master trader Howie Roseman to have something up his sleeve.

And for the second time this offseason, it’s being reported that Eagles wide receiver Nelson Agholor could be available.

CBS Sports’ Jason La Canfora wrote it back in February. Now, NFL Media’s Ian Rapoport is putting it out there, as well.

Don’t be surprised if the Patriots, who need more wideout help, are involved.

Agholor is four years removed from being a first-round pick in the 2015 NFL Draft. He carries a $9.387 million cap hit on the fifth year of his rookie contract. He has 185 receptions for 2,152 yards with 15 touchdowns in 60 career games. He’s caught 126 passes for 1,504 yards with 12 touchdowns over the past two seasons.

At 6-feet, 198 pounds, Agholor is a solid player. But is he worth the price tag? And what would it take to acquire him?

Let’s go back to the Patriots’ deal for Brandin Cooks over the 2017 offseason. Cooks was entering the fourth year of his rookie contract, and his cap hit was just $1.56 million. The Patriots dealt a first-round pick and change for Cooks. After a year in the system and before Cooks hit the fifth year of his rookie contract, when he would have been making over $9 million, the Patriots flipped him to the Rams for a first-round pick.

So, if the Patriots didn’t want to give Cooks over $9 million, would they be willing to pay Agholor that amount? Well, maybe.

The Patriots were willing to sign slot receiver Adam Humphries to a deal worth over $9 million as a free agent this offseason. Humphries has been more productive than Agholor over the past three seasons, but Agholor is bigger, comes with a better pedigree and could be seen as more versatile than Humphries.

Similar to Brandon LaFell and Chris Hogan, both of whom primarily were slot receivers before coming to New England, the Patriots could view Agholor as an outside receiver in their system. Agholor, like LaFell and Hogan, would still have the versatility to line up inside.

He would provide the Patriots with a second sure-thing at the receiver position. Currently, they have Julian Edelman as their No. 1 and Phillip Dorsett, Demaryius Thomas and Josh Gordon next on the depth chart. Deeper down, Bruce Ellington, Maurice Harris, Braxton Berrios and Damoun Patterson are competing for roles. Special teamer Matthew Slater also still is on the Patriots’ roster.

Dorsett had trouble rising up the Patriots’ depth chart last season. Thomas is coming off of a torn Achilles, and Gordon is still suspended. If the Patriots decide to fill their receiver need through the draft, there’s no guarantee that player could pick up the system in Year 1.

If Agholor either cost half as much or if he was on a multi-year contract, this would be a no-brainer. But $9 million-plus is a lot to pay for a one-year rental. At the same time, the Patriots have over $13 million in cap space, according to Miguel Benzan of the Boston Sports Journal. They could free up more cap room by extending Tom Brady. They also could lower Agholor’s cap figure by signing him to an extension.

It’s worth seeing what the Eagles want for Agholor, at the very least. If it’s a third-round or Day 3 pick, it’s worth considering swinging a deal. It’s tough to gauge how the Patriots value receivers.