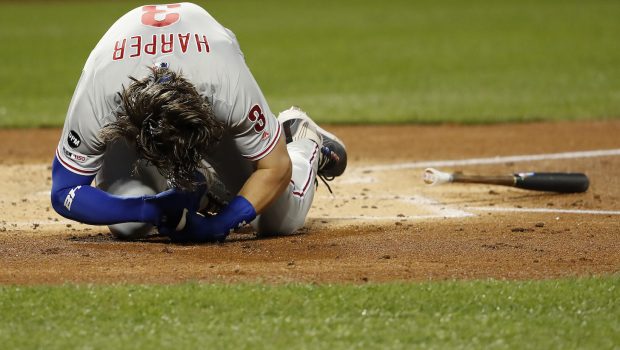 Bryce Harper exited the game with a right-hand contusion after he was hit on the right hand by a pitch from Mets starter Steven Matz in the third inning. X-rays were negative, but Harper said after the game that he could not grip a bat, and he was uncertain whether he could Saturday. “I don’t know yet. See tomorrow how I feel,” he said. “Of course, we’re in the stretch right now so if I can be in there, I’m gonna be in there. But gotta be careful too.” Harper, batting with one out and a runner on third, was ahead in the count 1-0 when Matz’s 93 mph fastball sailed up and in on him. Harper recoiled and the ball ricocheted off his hand: