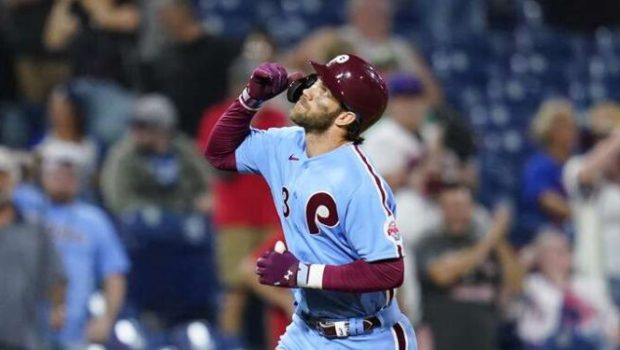 It was a gloomy night at the ballpark, with the Phils down 7-0 after the third inning to the awful Chicago Cubs.

Then Bryce Harper put the Phils on his back and the right fielder showed why chants of “MVP” are more than justified.

He doubled to start a seven-run, game-tying rally in the fourth inning, doubled in the go-ahead run in the sixth and sealed the Phillies’ 17-8 win with a three-run homer in the seventh.

Also alive, improbably, given the start in this one, is Philadelphia’s playoff push.

The Phillies are three games behind first-place Atlanta in the NL East with 16 games left this season, and 2 1/2 games behind St. Louis for the second wild card. San Diego and Cincinnati also lead Philadelphia in the wild-card chase.

With Harper as hot as can be, can the Phillies be counted out yet?

“It feels good but we’ve got a while to go,” Harper said. “I want to keep playing well and have good at-bats, have good games and just be where we need to be down the stretch.”

Each team scored seven runs in an inning, the Cubs taking a 7-0 lead in the third against a pair of relievers in a bullpen game that seemed headed toward a loss that would crush Philadelphia’s season.

“I don’t ever think about it like we don’t want to waste someone’s season,” manager Joe Girardi said. “We’re all involved in this, right? And the game is always, to me, about our team. But he’s a big reason why we’ve hung around, just because of the season that he’s had and the last 2 1/2 months, whatever he’s done. It’s been incredible to watch.”

Add this one to the highlight reel.

“It’s been a show for quite a while,” Girardi said.

Just don’t ask Harper — he says he refuses to look at his statistics.

Harper hit again in the fourth against 14-game winner Kyle Hendricks — Andrew McCutchen’s two-RBI double made it 7-5 — and walked to load the bases with two outs in his second at-bat of the inning.

J.T. Realmuto, who hit the tying solo homer in the eighth inning of Wednesday’s 6-5 win, delivered again with a two-run single up the middle off Michael Rucker that tied it at 7.

Cubs manager David Ross said Hendricks “lost his feel” on the mound as the Phillies rallied.

“It just looked like he couldn’t execute much,” Ross said. “It looked like the command was off. He ran to a lot of soft stuff. It didn’t look like he trusted his stuff tonight. Very uncharacteristic of Kyle tonight. It looked like I was watching a different pitcher out there tonight. I didn’t see the guy I normally know.”

Harper lined an RBI double the other way to left off Manuel Rodriguez (3-3) with one out in the sixth for an 8-7 lead. Didi Gregorius sliced a single to about the same spot as Harper’s hit and drove in two, and the Phillies led 10-7.

Then came the finale.

Harper hit his 33rd homer of the season into the second deck in the seventh, a three-run shot off Rex Brothers for 15-8 lead. The Phillie Phanatic danced on the dugout and pumped his furry green arms in the air as fans chanted “MVP!”

“I’m not going to do this every single night,” Harper said.

It sure seems like it. Harper won the 2015 NL MVP with a Washington Nationals team that missed the playoffs. He might not miss out on either by the end of the season.

Hector Neris (3-6) got the win in two innings of relief.