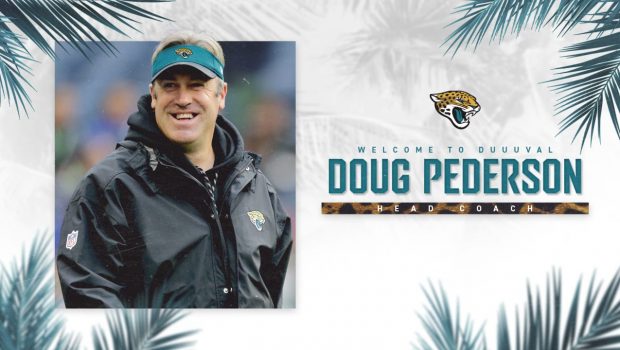 DOUGIE P’S INTRO AS A JAG, THEY WANTED HIM LAST YEAR — VID!

The Jaguars rolled out Doug Pederson as their new head coach at a presser today.

And owner Shad Khan admitted that before the Jags hired Urban Meyer last year he called Pederson, who declined an interview because he was taking a year off after being fired by the Eagles,

Pederson is inheriting a team that has gone 4-29 while firing two head coaches and finishing out the 2021 season with Darrell Bevell as the interim head coach. Bevell was promoted after the brief and disastrous Meyer era came to an end after just 13 games.

Pederson referenced that embarrassing episode during his press conference while also acknowledging that there’s a lot of work to do in order to get the roster in the shape needed to compete.

“I know you’ve been thought a lot but that’s about to change. I will make this a winning organization. This is why I have been hired. This is not an overnight fix, we’re going to do it one player and one coach at a time,” Pederson said, via the team’s website.

Pederson guided the Eagles to a Super Bowl title in his second year on the job, but it sounds like he may Jacksonville as a longer turnaround.