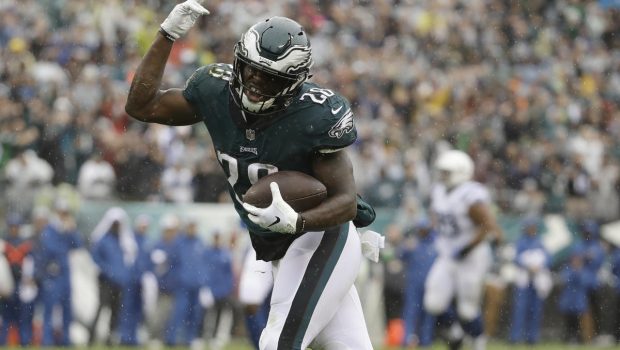 So, Eagles Nation is up in arms about coach Doug Pederson’s play-calling after he again eschewed the run for the pass in the Birds’ 23-21 loss to the Vikes yesterday.

But Riverboat Dougie is true to his nickname when the game’s on the line.

During the fourth quarter, the Eagles Wendell Smallwood (above) scored a touchdown to cut their deficit to 20-12. Everyone assumed they’d kick the extra point to make it 20-13.

But Pederson did what no one expected: He went for two, and it worked, and the Eagles cut the deficit to 20-14.

When Pederson made the highly unusual decision, the TV announcers questioned it, and social media lit up with the question: What is Pederson doing?

What Pederson was doing was showing he has a far greater grasp of analytics and game theory than any other NFL coach. Because while every NFL coach has always kicked the extra point in that situation, the analytics community has steadfastly insisted that going for two is the better option.

Kevin Cole, the Director of Data & Analytics for RotoGrinders, spelled out the reasoning last year:

In overtime you’ve basically got a 50-50 shot of winning. But if you go for two after that touchdown in an attempt to cut the deficit from eight to six, now you’ve changed the odds from 50-50 to more like 62.5 percent in your favor: 50 percent of the time you’ll make the two-point conversion, in which case you’ll win in regulation with a touchdown and one-point kick.

This might all sound like a justification that only sounds good after the fact, because the Eagles got that two-point conversion. But that’s not what this is. People who have thought through the scenarios have been saying for years that some coach ought to do what Pederson did. During the fourth quarter of the Steelers’ playoff loss to the Jaguars last season, I tweeted when the Steelers scored to bring the deficit to eight that they should have gone for two. I also added that “no NFL coach would even consider it.”

As it turned out, there was one NFL coach who would consider it, and it was the same coach who won the Super Bowl last season while embracing analytics. Pederson made a great call.