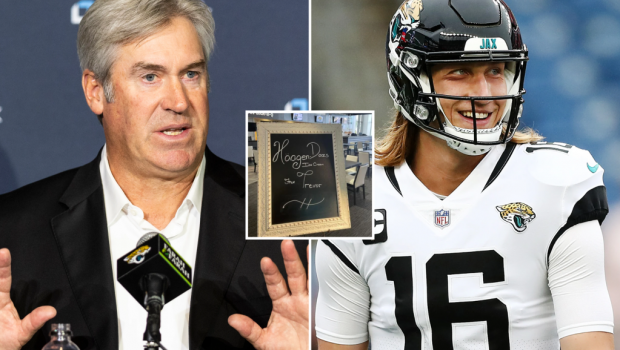 All kidding aside, Pederson is happy to have a franchise quarterback waiting for him in Jacksonville.

“That’s something I obviously looked at with the teams that were searching for head coaches, ‘Who is the quarterback?’ and ‘Is that person in place?’ And here, it is. I truly believe that,” Pederson said of Lawrence.

“Everything, as I’ve done my research on Trevor and talked to people, even talked to coaches who have played against them this past year say nothing but great things and kind of the sky’s the limit. . . . I’m just excited to come in here, roll up my sleeves and go to work, create a system that enhances his skillset and be successful.”

The No. 1 overall choice in 2021 had a rough rookie season. He completed 59.6 percent of his passes for 3,641 yards with 12 touchdowns and an NFL-high 17 interceptions. Lawrence also lost five fumbles.

Pederson said he intends to be the play-caller.

“I will say right now that I want to call the plays,” Pederson said. “I want to put myself in position to help this football team. That’s my — not only lead the team but I’ve done that in my five years in Philadelphia, and I feel really comfortable doing that.”