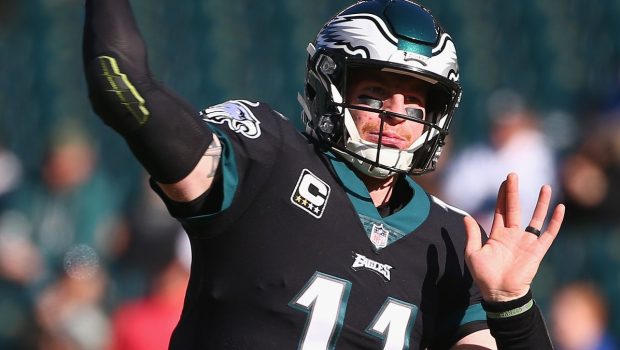 “Yes, Carson Wentz is the quarterback going forward,” coach Doug Pederson said at a joint news conference with executive vice president of football operations Howie Roseman yesterday. “And in Nick’s case, listen, we’d love to have everybody back throughout the roster, but as I’ve said many, many times, it’s not about one guy, it’s about the team, and we’re going to do what’s best for the team.”

Nick Foles, the reigning Super Bowl MVP, stepped in for an injured Wentz again in December and guided the Eagles to a playoff berth with three straight wins to finish the regular season. He led them to a road win over the Chicago Bears in the wild-card round before falling to Drew Brees and the New Orleans Saints in the divisional round Sunday.

Barring a franchise tag designation, Foles can become a free agent this offseason.

“We would love to keep Nick Foles,” Roseman said. “You talk about a guy we drafted here and we’ve grown incredibly close with. I don’t know a team that wouldn’t want to have Nick Foles on their roster. Certainly as we go into the substance of those discussions, we haven’t had them yet, but there’s no question we love having Nick Foles as an Eagle in Philadelphia and we’d love to keep him.”

Foles, 30, wants to be a starter, however, and could net a sizable payday on the open market, making it likely he’ll be elsewhere in 2019.

The Eagles have not moved off their position that Wentz, 26, is their franchise quarterback. He was the lead candidate for MVP before his knee injury in 2017, and threw for over 3,000 yards with 21 touchdowns and 7 interceptions in 11 games this season while coming off a torn ACL/LCL. He was also playing through back pain for part of the year. It was discovered after Week 14 against the Cowboys that a stress fracture had developed.

On Monday, Wentz said that he does not anticipate the back injury to be a recurring issue, and he is hopeful to be on the field with his teammates when the offseason training program begins in April.