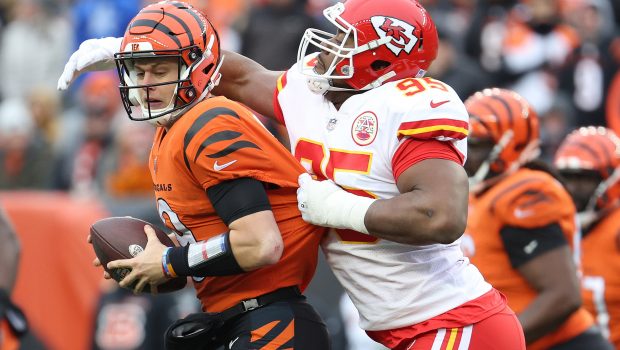 DON’T SLEEP ON BURROW AND BENGALS, +7 AT CHIEFS

The line on the Bengals-Chiefs hasn’t budged all week:

The consensus on the Strip is that the Chiefs have too much experience and are a 7-point home fave.

Bengals quarterback Joe Burrow has led Cincy to its first conference championship game since the 1988 season.

Thanks in large part to his hookups with his LSU chum, rookie receiver Ja’Marr Chase.

Joe Mixon is in his fifth season in Cincy, and he has put up career-high numbers in yards (1,205), touchdowns (13) and carries (292) to help take some of the offensive load off Burrow, who was the most sacked quarterback in the league in 2021.

The Chiefs’ Arrowhead dominance and the home crowd make the venue a tough place to play and, as Patrick Mahomes showed last week against the visiting Bills, it’s a place where a game-tying drive can happen in just 13 seconds.

But the Bengals have thrived this season by keeping games close — Cincinnati has lost only one game by more than 7 points — and then either having Burrow find a playmaker or getting a timely stop or takeaway from its defense.

Burrow, like Josh Allen, is capable of going throw-for-throw with Mahomes, and a shootout would make taking the over a safer bet, especially since it’s unclear whether Kansas City’s Pro Bowl safety Tyrann Mathieu will play on Sunday after he left last week’s matchup against the Bills with a concussion.