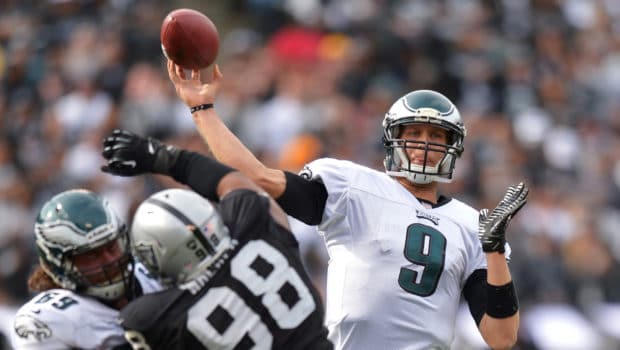 DON’T SLEEP ON EAGLES FOLES AND AGHOLOR IN FANTASY THIS WEEK!

One of my favorites is Nelson Agholor, and he should pair with another sleeper this week in Nick Foles to produce at a high level against the Raiders. Agholor is a borderline starter in the majority of leagues.

He is seeing plenty of targets of late, and his production has been fantastic. He has 32 targets in his past three games, and he has 22 catches over that span for 264 yards and two touchdowns.

Agholor also has nine games this season with at least five targets, and he’s scored a touchdown in seven of those outings. The Raiders have also allowed 15 receivers to score at least seven Fantasy points in a standard league this season.

I expect Agholor to score at least seven Fantasy points this week, which makes him a safe No. 3 receiver in the majority of leagues. But based on his recent production, as well as his targets, he’s capable of more.

It would not be a surprise to see Agholor finish as a top-20 receiver in Week 16:

0 thoughts on “DON’T SLEEP ON EAGLES FOLES AND AGHOLOR IN FANTASY THIS WEEK!”