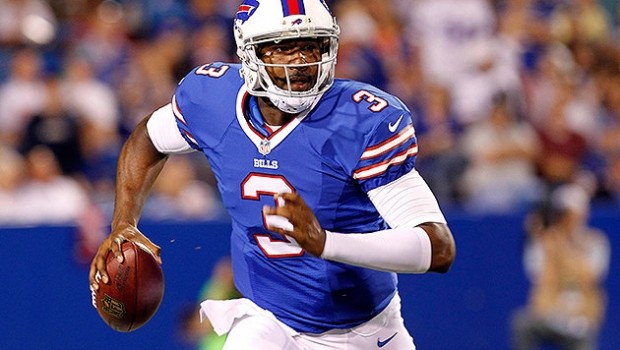 DON’T BE SHOCKED TO SEE QB E. J. MANUEL AS AN EAGLE IN THE FALL

He’s got Sam Bradford, Mark Sanchez and Tim Tebow on the roster, but …

If the Buffalo Bills end up dangling E. J. Manuel for a late-round pick in August, keep an eye on the Eagles as a potential trade partner.

After recruiting Manuel at Oregon, Chip Kelly told NFL Network in the lead-up to the 2013 NFL Draft that the former Florida State star was a player he “didn’t get a chance to coach but would like a chance to coach.”

NFL.com suggests that Manuel would make for an interesting reclamation project under Kelly’s tutelage if he ultimately flames out in Buffalo.

Veteran Matt Cassel was widely viewed as the favorite to open the season as the Buffalo Bills’ quarterback after splitting practice reps evenly with Manuel and Tyrod Taylor last month.

At least one prominent beat writer believes, however, that Cassel won’t be under center in Week 1 versus the Colts.

“I wouldn’t rule it out,” writes Vic Carucci of The Buffalo News, “but I believe he was acquired mainly to provide the veteran backup quarterback the Bills lost when Kyle Orton suddenly retired the day after last season.”

Carucci isn’t citing sources, but he has proven to be plugged in since joining the Bills beat last September.

The team’s brass appears serious about letting this competition play out on the field, so we are unlikely to have a good read on a frontrunner until preseason action begins in August.

One thing we can say with certainty is that new coach Rex Ryan is an avowed fan of Taylor.

“I actually tried to trade for him when I was with the Jets,” Ryan recently revealed, adding that Taylor has “a little” of Russell Wilson to his game.