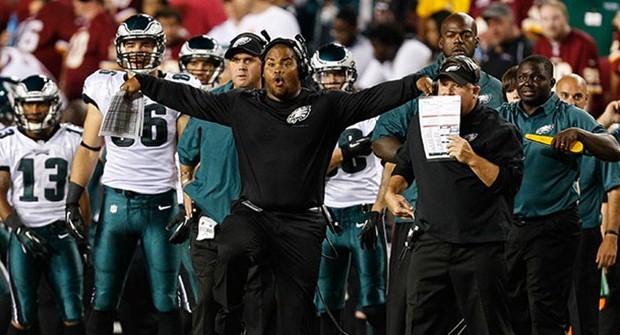 All of Philly has its panties in a knot over what’s going on in the Eagles front office:

So many jobs to fill and so little explanation coming from Birds Supreme Leader Chip Kelly.

But even with several key jobs open, and no word from above, Eagles running backs coach Duce Staley insists everything’s under control.

“You just do your job, whatever it is,” Staley said of the staff being in flux, via Geoff Mosher of CSNPhilly.com.

“Chip will handle that. Chip has been doing an awesome job putting together the guys that he needs to get into the room and then taking care of that. You just handle your job and that’s what you’re here to do.”

At the moment, Chip is without a personnel executive, after he won the power struggle with Howie Roseman and the ability to pick a “General Manager.”

In a year ripe with rumors that he wants to find a way to land his old Oregon quarterback Marcus Mariota, there are plenty of moving parts for Eagles fans to fret over.

But Staley said that worry didn’t extend to the coaches.

In Chip he trusts. We’ll find out if that’s a good plan.