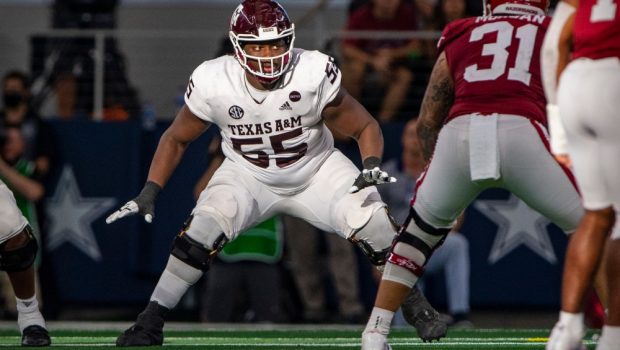 In his first NFL mock of the new year, he sends an edge star, a wide receiver whose name we keep hearing, and an interior offensive lineman to the Eagles at the 15th, 16th, and 19th-overall selection.

Here’s what he had to say on all of them beginning with the EDGE standout, George Karlaftis of the Purdue Boilermakers:

The Eagles need to add some young talent to their defensive line; Fletcher Cox and Brandon Graham can’t play forever. I wish Karlaftis were longer, but I love his leverage and power as a rusher, and he has some inside/outside flex.

Jeremiah names former USC Trojans star receiver Drake London as the pick at 16. He’s been linked to the Eagles on at least two other occasions. Eric Eager of Pro Football Focus named London as one of the guys he thinks the Birds should take a flier on in Round 1:

London gives the Eagles a big-frame wideout with an enormous catch radius to complement Devonta Smith’s pristine route running. London reminds me of Mike Williams coming out of Clemson. It’s almost impossible to overthrow him, and he dominates 50-50 balls.

He sends a stud along the interior, Texas A&M’s Kenyon Green to Philly at 19.

The Eagles will likely need to replace future Hall of Famer Jason Kelce, who’s 34 and set to become a free agent. They already have his heir apparent in the building in Landon Dickerson, last year’s second-rounder, whose move to center would create room for Green at guard. Green is an outstanding athlete with ideal size (6-4, 325) and temperament.

Offensive linemen taken late in the first round won’t excite a fan base, but for an Eagles team that figures to replace Brandon Brooks in the offseason, a team that has seen Jack Driscoll finish each of his first two NFL seasons on the team’s injured reserve, you can understand where the theory comes from.