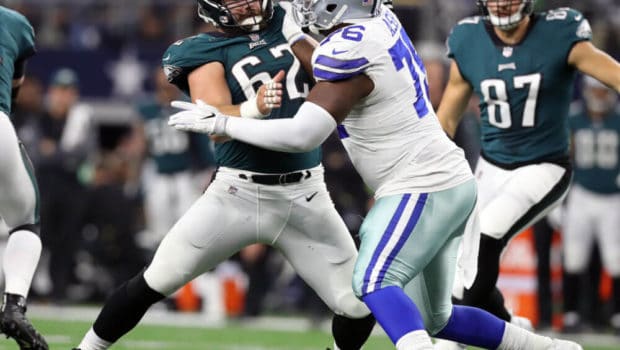 To think, for much of the offseason, Kelce’s name came up frequently in trade speculation and many people in NFL circles believed the Eagles would deal him. The Eagles had drafted Isaac Seumalo in 2016 and were preparing him in his rookie season for an eventual takeover.

“At that point, whatever happens, happens,” Kelce said Tuesday, reflecting on his mindset while hearing his name dangled around the trade market. “I was just kind of taking it one day at a time, trying to really focus on what was happening the year before that happened to me playing a little bit under the level I played at. I was just focused on getting better.”

Kelce was asked if team representatives reached out to him to either validate or dispel the rumors. Brandon Graham, for example, was told by team management that he wouldn’t be traded when the defensive end’s name surfaced in trade speculation.

Kelce paused, exhaled deeply, and decided to avoid the question.

Asked if he’s simply keeping conversations private or is still irked by the potential of being shipped away, Kelce replied, “No comment.”