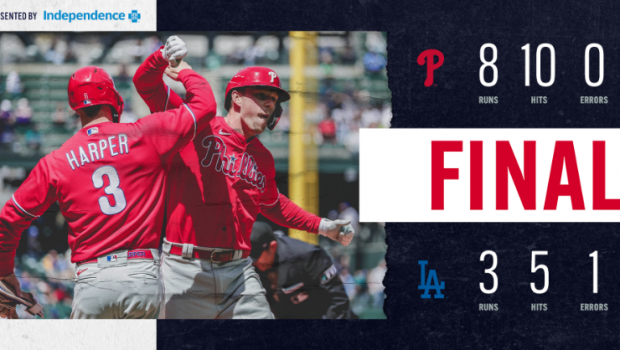 The Phillie have become the Bash Brothers.

Just ask the Dodgers and their pitching coach, Mark Prior.

Dodger pitching has given up 29 runs in three losses to the red-hot Phils.

And today’s fourth game might be a sweep with Aaron Nola on the mound for the Phils against Michael Grove, who has yet to pitch above Double A!

Bryce Harper homered for the third straight game last night and finished with three hits in an 8-3 victory. It was part of a barrage in which the Phillies went deep four times and got to .500 (17-17) for the first time since April 13.

And they are just a game and a half out of the third wild card spot in the National League.

“He’s in a great spot. He’s so important to our offense. We’ve got other guys in good spots too, which is really helping out,” Phillies manager Joe Girardi said.

Harper also had a double, making him the first visiting player in the 60-year history of Dodger Stadium to have a homer and at least two extra-base hits in three straight games.

“I think we’ve done a great job of coming in here, getting on guys early and battling the best we can and jumping on stuff when we can,” said Harper, who is 8 for 12 with three home runs and eight RBI in the series.

Jean Segura, Kyle Schwarber and Rhys Hoskins also hit home runs off Dodgers starter Julio Urías (2-3). Philadelphia — which has has won four straight and five of its last six — today looks for its first four-game sweep at Chavez Ravine since 1985.

One of the few saving graces for the Dodgers is that they won’t see Harper in the series finale. Harper is scheduled to receive a platelet-rich plasma injection to help with a partially torn ligament in his right elbow.

Harper will remain the designated hitter since he won’t throw for a month.

“It has been nice to get some clarity. It’s been huge for me. I know where it stands right now and obviously go with that,” Harper said.

Harper hit a three-run shot to right field off Urías to extend the Phillies’ lead to 6-1 in the third inning. It is the eighth time in Harper’s career he has homered in at least three straight games and the first since August 2019.

Ranger Suárez (4-1) went a season-high seven innings and won for the third time in his last four starts.

Mookie Betts hit a solo shot for Los Angeles, who have dropped four straight for the first time since last June.

“The last four games we haven’t executed like we are capable of doing,” manager Dave Roberts said. “When you take a team that those guys who are swinging hot bats and you don’t make good pitches, they are going to make you pay.”

Segura extended his hitting streak to 11 games in the first inning with a three-run homer that barely got over the short fence in the left-field corner. The Dodgers had a chance to get out of the inning, but third baseman Justin Turner had a throwing error on a grounder hit by Nick Castellanos, which brought Segura up next.

Schwarber and Hoskins added solo shots in the fourth to extend the lead to 8-1.

The Dodgers responded in the bottom of the fourth on a two-run double down the right-field line by Cody Bellinger with the bases loaded.