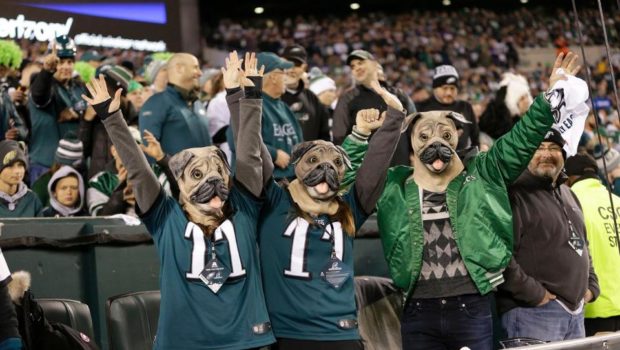 DON’T LAUGH: EAGLES AS UNDERDOGS MAY WIN NFC EAST WITH 9-7!

The Eagles have put — or are trying to put — last Sunday’s train wreck loss at Miami in the rear-view.

Coach Doug Pederson is fielding legitimate questions not only about whether they’re capable of capitalizing on a historically bad NFC East race but whether they’re in need of a foundational shakeup just two years after winning the Super Bowl.

Pederson has preached time and again during his three-plus years running the show that the Eagles should never be counted out, and pretty much every time, he’s proven correct.

In 2016, with Carson Wentz thrust into a last-minute starting job as a rookie, he kept a team built with the scraps of the Chip Kelly era near .500, coaching the Birds within one score in six of their nine losses and ending the year with two straight wins. In 2017, he rewrote the definition of “underdog,” out-scheming everyone and everything — including a rash of high-profile injuries — to secure Philly’s first Lombardi Trophy against the greatest dynasty of all time. In 2018, with the Eagles slogging after a second straight season-ending injury to Wentz, he oversaw a 5-1 finish that nearly got his club back in the NFC title game.

2019 was the year the Eagles were supposed to be good — the year they weren’t supposed to be underdogs. Wentz finally got healthy. He finally got some new toys. And yet, here we are, 12 weeks in, and the team has not looked good for more than, like, seven or eight quarters of game-play this whole year. Week 4 against the Packers was pretty impressive. The beat-down on Luke Falk and the Jets was kind of nice. Week 8 over the Bills was promising. Mostly, though, Pederson’s Eagles have been flat-out mediocre.

When the offense clicks, the defense folds. When Jim Schwartz’s unit locks down, Pederson’s unit stalls. Wentz has been fine — not great but not awful, with some absolute duds in the last month. His supporting cast has been far worse. The problem, you see, is that not one person can be blamed, because the reality is it’s the whole package that’s broken. Coaching. Execution. Roster construction. There were definite hints of this in 2018, before the Eagles caught a second wind of Nick Foles magic, but the issues are even more prominent now.

That said, how do the circumstances compare to those of late-seasons past? Can Pederson’s history of righting the ship at the exact right time actually change the 2019 narrative, or is this season beyond salvation?

Let’s dive into each of Pederson’s previous three years as head coach to see how the final quarter of this season stacks up against those of 2016-18, then predict how the rest of 2019 will play out:

Pederson’s first Eagles team faced postseason elimination in Week 15 against the Baltimore Ravens. Wentz and Co. led a late scoring drive and attempted a two-point conversion to win it but fell short, sending the Eagles to 5-9 before a two-game win streak.

This one’s notable because the Eagles were in prime and poor position at the same time. On paper, they were on a fast track to the No. 1 seed, clinching an NFC East title in Week 14 against the Los Angeles Rams. With Wentz going down in that same game, however, pretty much everyone began writing them off as the weakest of the playoff teams, especially after Foles’ shaky regular-season finish.

Just like 2017, the Eagles lost Wentz after Week 14 here, as his stinging overtime loss to the Dallas Cowboys that week was the last fans would see of him until 2019.

How will this year’s Eagles finish? For that, let’s see how their actual road to the playoffs stacks up to those other years:

The Eagles’ path to the playoffs

If you were to list each of Pederson’s seasons in order of most probable December playoff runs, it’d probably go like this:

In other words, whether you like it or not, if you’re a fan of the 2019 Eagles, it’s not time to panic just yet. Does the current team need some serious changes? Yes. Were its postseason hopes evaporated by Week 13’s embarrassing loss to Miami? Absolutely not.

The 2016 season was Pederson’s first year, when he was essentially still testing the waters, not to mention working with a WR corps that rivals 2019’s in terms of ineptitude. They were never going to get into the playoffs, as inspired as they finished the year. In 2017, there was no question they were getting in; it was a matter of whether they were going to advance. And 2018? Believe it or not, the road to the postseason was even harder then. Even if you (rightfully) consider this current group more disappointing or dysfunctional, the final four-game slate of 2019 is so absurdly tilted in the Eagles’ favor that it’s impossible to ignore:

Yes, the Eagles just lost to the Dolphins. But no matter how you slice it, they’ve got a clear journey to redemption laid right in front of them, mainly because Dallas, at 6-6, is just as maddeningly inconsistent.

How can they get it done? It basically boils down to this: Finish better than Dallas, or finish tied with Dallas (as long as you beat them in Week 16), and you’re in. Other than that, you can kiss the playoffs goodbye. The wild card is out of the question, so this is a fight for the East, and tiebreakers indicate that as long as Philadelphia beats Dallas in their rematch and is no worse than them in the standings, the division will be theirs. You’re smart enough to do the math, but that means if the Eagles win out, they’ll be in the playoffs. If they finish 8-8, they either need Dallas to finish no better than 8-8, with one of those losses coming to the Eagles.

So what’s actually going to happen?

It sounds incredulous to bank on the Eagles. And it should be stated once more that, regardless of Philly’s finish, Pederson’s club is in need of more than a quick fix, whether that means replacing a coordinator, making bold moves in the lineup, etc. But it’s even more incredulous to assume the Cowboys are going to run away with the division. Even if you ignore the reality that Dallas has been incapable of beating winning teams in 2019, it’s not as if Dak Prescott and Co. have a cakewalk finish of their own.

The Cowboys close with games at the Bears (6-6), against the Rams (7-5), at the Eagles and then against the Redskins (3-9). You’re telling me they’re not capable of dropping one or even both of their NFC games before the Philly rematch? Sorry, but the general consensus has gotten too close to “This is the Cowboys’ division” to square with actual Cowboys history.

Crazy as it may sound, here’s my prediction for how the East will look once the season is over:

The Eagles aren’t very good right now, but their schedule is bad enough that they can run the table. It’s also not crazy to think they could drop one and still see Dallas finish below them, at 7-9. Either way, the circumstances just make it too hard — and too much fun — not to envision Pederson, somehow, some way, solidifying the “underdog” reputation once more.