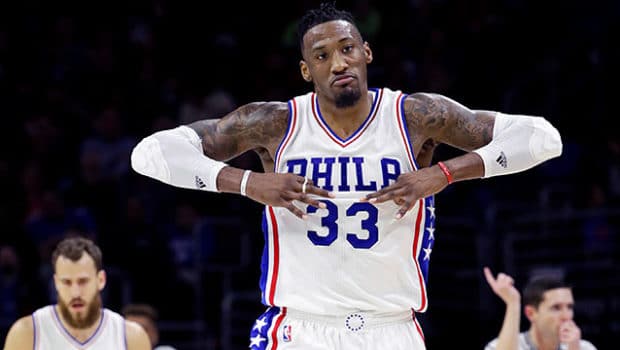 DON’T BE SO DEFENSIVE! SIXERS’ COVINGTON IS A FORCE ON ‘D’!

Three years ago Robert Covington was thought of strictly as the Sixers’ Big Shot Rob.

And now he resembles the Minister of defense!

He placed fourth in the NBA Defensive Player of the Year voting.

“It was amazing, just to be in that category with those types of guys,” Covington, who was beat out by winner Draymond Green, and runners-up Rudy Gobert and Kawhi Leonard, told Sixers.com.

“That’s just a testament to hard work, and everything I’ve been through,” he said. “Coach [Brett Brown] really emphasized a lot about becoming a two-way player. They’ve challenged me, and Coach knows that once he gives me a challenge, I take offense to something like that.”

“Our whole identity is pace, space, and defense, and Rob’s ability to shoot the three and his ability to defend is very important, just because how we play,” Pierce said recently. “His individual accomplishment of being a high deflections guy, and just being an individual defender – he’s normally guarding the best guy on every team – that’s his growth. We’re trying to use that as much as we can with him.”

“I knew in order for me to really stick around in this league, I’d have to develop that,” Covington said, “and Coach Lloyd has really helped me to get to that point.”

“We got so much talent, guys who are hungry to be on the court,” Covington said. “We’re looking forward to practice. Once everybody’s on the court together, man, all that different type of personalities and everything, it’s just going to make us push each other that much more harder.”