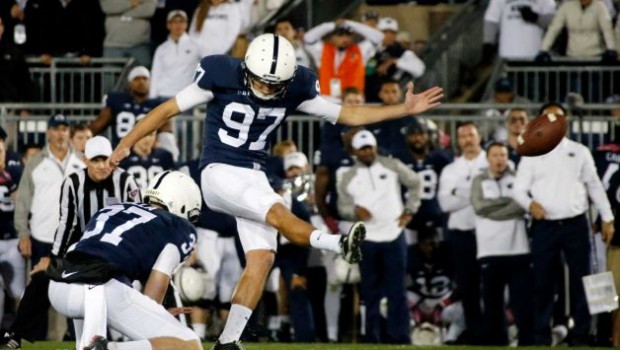 DON’T BE DEFENSIVE — PENN STATE WAS THISCLOSE TO BEATING OSU

Mike Hull and Anthony Zettel had the games of their lives against Ohio State Saturday night but Penn State still fell short 31-24 in double OT.

Linebacker Hull made a career-best and game-high 19 stops. Defensive tackle Zettel had his first interception return for a touchdown, two tackles, and a sack.

And defensive coordinator Bob Shoop’s unit became the first Ohio State opponent this season to hold the Buckeyes under 300 total yards and a season-low 74 yards passing.

“Our offense put us in a great position, and we just need to come through,” Zettel said.

The defensive tackle dropped into coverage on Ohio State’s opening drive of the third-quarter, picked off J.T. Barrett’s pass, and raced 40-yards to the end zone. It was the first of 24 unanswered points Penn State would score to force overtime.

Hull had an interception too, reading the Ohio State quarterback well enough to snare a fourth-quarter pass and return it 12 yards. Penn State pulled within three points eight plays, 45 yards, and two minutes and 24 seconds later when Christian Hackenberg found Saeed Blacknall for a 24-yard score in the corner of the end zone.

There were no turnovers in overtime, though. Barrett, who injured his knee near halftime, was effective on the ground for the first time in some time during the extra session. He scored on a 5-yard run to tie the game in the first overtime before scrambling in from four yards out to win the game in the second session.

“We kind of dropped the ball there in overtime as a defense,” Hull said. “We knew what we had to do, and we didn’t do it.

Hull and Zettel have both been key to Penn State’s defense all season, and that isn’t going to change. Whether they did enough to win on this night is up to interpretation.

But they certainly did plenty.

“I’ve been doing this for 20 years, I’ve coached in a lot of leagues — even the NFL — and [Hull] is playing at a really, really high level, week in and week out,” head coach James Franklin said.

“He makes plays from sideline to sideline, in the run game and the pass game. You guys have heard me say it before, I have a man crush on that guy.”