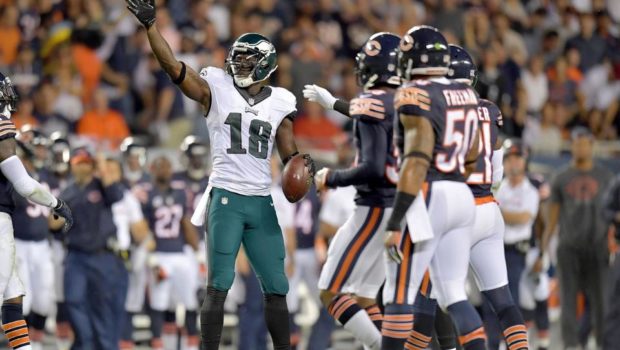 LOOK FOR EAGLE WR DGB TO HAVE BREAK-OUT GAME TOMORROW

If you’re looking for an Eagles’ secret weapon for tomorrow’s showdown with the Steelers at the Linc:

How about wide receiver Dorial Green-Beckham.

Eagles coach Doug Pederson raved about DGB after the Eagles acquired the height, weight, speed specimen via trade from the Tennessee Titans. He looked forward to finding ways to get Beckham the football in the middle of the field as well as in the red zone.

“I noticed at practice, I am getting more looks, more targets, more catches. I feel like it is going to carry over to the games,” Beckham said. “It all starts at practice. Early on during the week, you have to prepare yourself so when the time comes; you step foot on that field you get it. When those opportunities come, you have to make plays out of them.”

Pederson said Beckham is getting more and more familiar with the playbook, and they want to get him more involved in the offense. They are lining Beckham up both inside and outside which requires him to learn multiple positions. It’s all a part of the plan to get him more touches.

“A player that is coming along and we would like to get a few more touches is DGB,” Pederson said. “He is a big, physical kid that can run exceptionally well. We would love to be able to get him the ball more.”

The progress that Beckham has made since arriving has impressed Pederson and the Eagles staff. Beckham has been able to work on the nuances of the wide receiver position with Greg Lewis, his position coach.

This week the Eagles will face a Steelers defense that features a lot of zone coverage. The chemistry with Carson Wentz will come into play because he is throwing to spots before receivers make their break, expecting them to get there. Beckham touched on the chemistry that is required when facing zone coverage.

“It starts with trusting the quarterback,” Beckham said. “We know that they will play zone. As a receiver, we have to get our depth. That’s big in our offense when we are playing against a zone team. Get your depth and have perfect timing with the quarterback.

“If it’s an 18-yard route, you have to make sure you are at 18. If not, it throws off the timing for the quarterback and then he feels rushed.”

Through two games, Beckham only has four receptions for 32 yards. The Eagles know he is capable of posting much better numbers and will make it their goal to get him the ball this week.