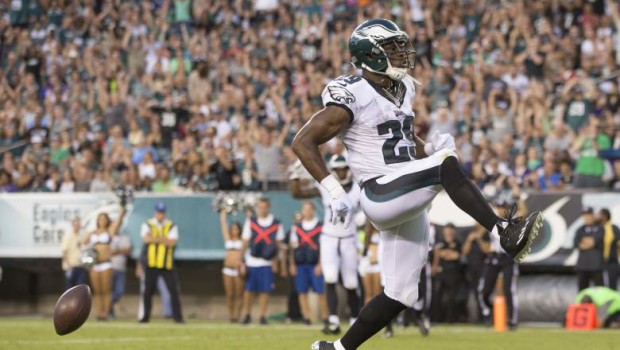 DON’T RUN AWAY FROM EAGLES’ DEMARCO MURRAY IN FANTASY LAND!

And although the Eagles’ O-line is just a cut beneath the Cowboys’ the consensus is to stay away from Murray come Fantasy Draft time.

Murray had his big breakthrough season with the Cowboys last season, when he turned a massive workload (449 touches) into an NFL-high 2,261 total yards and 13 touchdowns. He traded in the Cowboys’ dominant offensive line for a free agent deal with the Eagles, where he’ll be flanked by Ryan Mathews in Chip Kelly’s fast-paced attack.

Stylistically, Murray is a superior fit in Kelly’s offense, which played a part in the coach jettisoning franchise rushing leader LeSean McCoy at the start of a busy offseason. Murray is the one-cut, north-south runner that Kelly prefers, more often avoiding negative-yardage plays while busting the second-most 20-plus yard rushing plays (15) in the NFL in 2014.

While Murray previously had a reputation for being brittle and is all but assured to see less work in Philly, he’s also running in an explosive offense that allowed McCoy to lead the NFL in rushing two seasons ago. That system gives Murray a chance to retain his NFL rushing title, even if he gets less work behind a weaker offensive line.