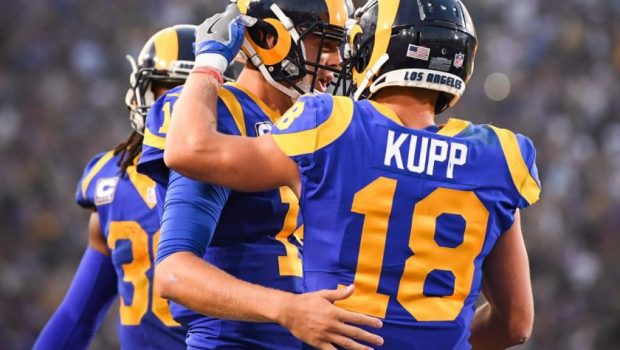 The ball sailed out of Tom Brady’s hand and down the left sideline, with Rob Gronkowski and three Rams converging.

To the naked eyes of the crowd in Mercedes-Benz Stadium, it seemed like yet another hopeless pass in an evening that overflowed with them.

To Les Snead, the Rams’ general manager, it was a replay he immediately wished he could overturn, and he might have if the Rams’ Cooper Kupp (above with Jared Goff) hadn’t suffered an ACL that put him out for the season.

“It’s interesting when you see that occur,” Snead said, in a massive locker room of resignation and fatigue.

“I’m saying, dang, I’ve kinda watched that for a lot of years. Tom made a good throw, Gronk made a good catch, they made the plays. That’s what we didn’t do.”

It went 29 yards and it set up Sony Michel’s touchdown, and it finally separated this Super pretzel in which the Rams and Patriots were intertwined.

It was also the longest play in this stunningly defensive game, a back-to-the-future Super Bowl that happened barely two months after the Rams had beaten the Chiefs, 54-51, and supposedly turned pro football into drag racing.