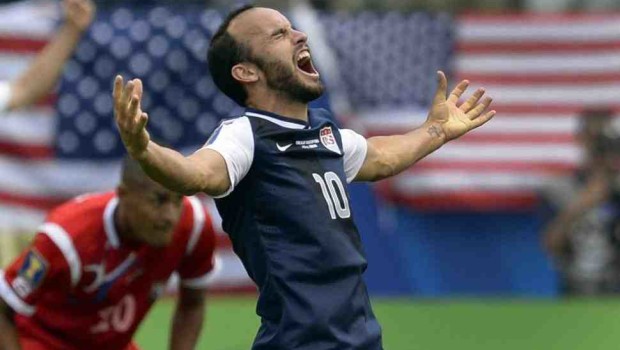 DONOVAN’S RIFT WITH COACH LED TO HIS BEING AXED

The greatest player in U. S. soccer history won’t be going to Brazil next month, and neither will the Union’s Maurice Edu

The doubt began to creep into Landon Donovan’s conversations several months ago.

He is the leading scorer and playmaker in U.S. soccer history, the best player the country has produced and at 32 healthy enough and experienced enough to be a World Cup difference-maker.

Surely he was a lock to make the U.S. team for Brazil, right?

Not in his mind, which is why Donovan began talking about what would happen if, not when, he made it to his fourth World Cup

On Thursday those doubts proved prescient when Donovan was among seven players cut by coach Juergen Klinsmann as the United States announced its 23-man World Cup squad.

“Well this is certainly one of the toughest decisions in my coaching career, to tell a player like him, with everything he’s done and what he represents, to tell him that you’re not part of this right now,” Klinsmann said Thursday. “His disappointment is huge. I totally understand that. He took it very professional because he’s an outstanding professional player.

“It has been an honor and privilege to have represented the U.S. National Team in three World Cups,” he wrote. “I was looking forward to playing in Brazil and, as you can imagine, I am very disappointed with today’s decision. Regardless, I will be cheering on my friends and teammates this summer, and I remain committed to helping grow soccer in the U.S. in the years to come.”

In many ways, Donovan’s omission wasn’t all that surprising. The Galaxy standout, who has appeared in more World Cup games (12) and scored more goals (5) than any American player, has been at odds with Klinsmann since taking a three-month sabbatical from soccer at the start of World Cup qualifying last year.

Donovan said he needed a break after averaging a game nearly every eight days for a decade. And Klinsmann, who demands 24/7 devotion to soccer, used that to question Donovan’s hunger and commitment. The rift appeared to widen last month when the coach challenged Donovan’s fitness before a friendly with Mexico, then kept him on the sideline until early in the second half.

The timing of the roster’s release was almost as surprising as the names that were omitted since Klinsmann had promised to wait until the June 2 deadline for setting his World Cup team. Instead, he made the final cuts eight days into a three-week training camp, giving U.S. Soccer’s media relations staff just 90 minutes notice to prepare a press release.

Six other players were sent home Thursday, among them defenders Brad Evans, Clarence Goodson and Michael Parkhurst — and the Union’s Maurice Edu.

Evans, who appeared in 10 games for the U.S. last year, played a big role in helping the team qualify for Brazil while Goodson was the only defender in camp who also played that position in the last World Cup. And the versatile, Parkhurst, who started five of the six U.S. games in last summer’s Gold Cup, can play several positions.

Among those who made the World Cup team were 20-year-old defender DeAndre Yedlin, whose national team experience consists of 34 minutes off the bench in two friendlies; Julian Green, 18, whose half-hour in last month’s Mexico game marked his only appearance for the U.S.; and 21-year-old defender John Brooks, who has played just twice for the U.S.

That leaves Klinsmann with seven players who are 24 or younger, 13 with 20 or fewer international caps and just six players with previous World Cup experience — already leading to speculation that Klinsmann, who recently signed a four-year contract extension, has begun looking ahead to 2018.