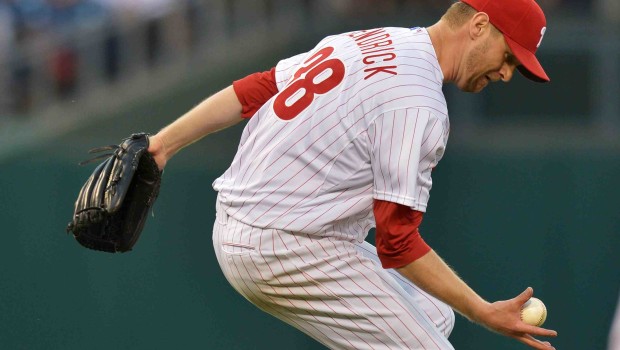 Domonic Brown homered, doubled and drove in three runs to lead the Phillies to a 9-5 victory over the Arizona Diamondbacks on Friday night.

Right, and the next thing we will report is that pigs were seen flying over Citizens Bank Park!

Grady Sizemore also had three hits, including the 1,000th of his career, with a double and an RBI for the Phillies, who entered 12th in the NL in runs. They scored at least nine for the eighth time this season and improved to 10-0 when reaching eight runs.

“Real good swings of the bats, extra-base hits, bases on balls,” manager Ryne Sandberg said. “It was a good night on the offensive side for the whole lineup.”

Kyle Kendrick (5-10 photo above) allowed three runs and six hits in 5 2-3 innings. It was the first win for Kendrick in his eighth career start against the Diamondbacks, giving the right-hander a victory over every NL team.

“I felt good. I just didn’t have it tonight,” Miley said.

Sandberg benched slumping slugger Ryan Howard for the third straight day in favor of Darin Ruf, who went 1 for 2 with an RBI.

“He swung the bat aggressively, had some good at-bats,” Sandberg said.

The manager was noncommittal on whether Howard would return to the lineup Saturday.

Miley labored through the first inning when Philly sent eight batters to the plate while taking a 2-0 lead on a bases-loaded walk to Carlos Ruiz and Brown’s groundout.

It was 3-0 after the second thanks to Chase Utley’s RBI single, and the Phils tacked on two more in the third on Ruf’s sacrifice fly and Cody Asche’s RBI single.

The Phillies looked in complete control when Ruf doubled and scored in the fifth. But Sandberg elected to lift Kendrick with the bases loaded and two outs in the sixth, and it backfired.

Marte cleared the wall in left, his first homer in 68 career at-bats, against left-hander Antonio Bastardo to make it 6-4.

“I wasn’t looking to hit a homer, (but) it was a really good feeling for me,” Marte said through a translator. “I’m really happy just to get the opportunity.”

Bastardo came back out for the seventh but was lifted after consecutive singles with none out. Justin De Fratus then struck out three batters, leaving the bases loaded when he fanned Mark Trumbo for the final out.

“That was a game-saving moment right there,” Sandberg said.

Trumbo, Arizona’s big offseason acquisition who has battled injuries and offensive struggles, yanked his helmet off and threw his bat down in disgust after swinging through a 93 mph fastball.

Brown gave Philadelphia some cushion in the seventh when his two-run shot to right off right-hander Evan Marshall made it 8-4.

It was just the seventh homer of the season and second since June 14 for Brown, who hit 27 homers in an All-Star season in 2013 but has seen a huge drop in production this year.

He’s batting .291 in his last six games, though, and Sandberg hopes the homer will help.

“He looks more relaxed, and a good swing of the bat with the home run should really build some confidence with tonight’s game,” Sandberg said. 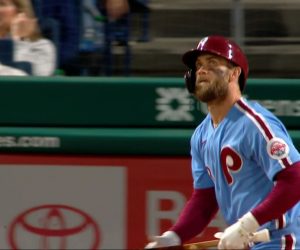