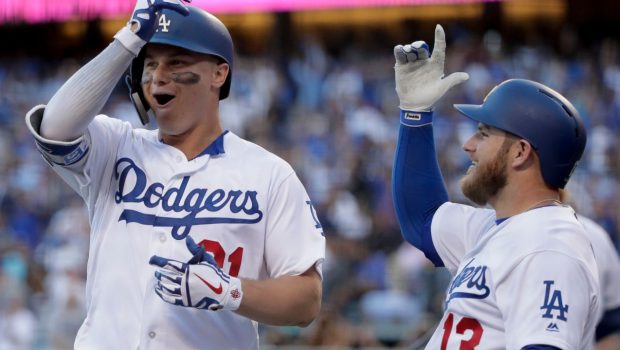 Ryu delivered in his first postseason start since 2014. He allowed four singles — all with two outs — struck out eight and walked none.

Dodgers great Sandy Koufax was among those who gave Ryu a standing ovation as he walked to the dugout after his final pitch.

“I’m happy that I was able to keep my promise that I would go full-throttle from the get-go,” Ryu said through a translator.

The Dodgers set franchise and National League records by hitting 235 homers during the regular season, and their tear continued with three more to begin their playoffs. The defending NL champions actually were outhit 6-5 by Atlanta, but the Braves only got singles.

“I don’t really feel like there’s anyone on this team that’s going up there trying to hit a home run,” said Max Muncy, who had a three-run shot with two outs in the second. “It’s just a result of us having a good approach and good at-bats. I feel like a lot of the home runs we’ve had have come off of long at-bats, working the counts and wearing the pitcher down.”

Game 2 in the best-of-five matchup tonight at Dodger Stadium, with Clayton Kershaw starting for Los Angeles against Anibal Sanchez.

The Braves have lost eight straight series openers in the postseason. They haven’t won a Game 1 since 2001 when they went on to sweep Houston in the NLDS.

Rookie Ronald Acuna Jr. struck out twice and went 0 for 4 as the Baby Braves were blanked. This was Atlanta’s first playoff appearance since 2013, when they lost to the Dodgers in four games.

Joc Pederson’s leadoff shot in the bottom of the first rattled Mike Foltynewicz in his postseason debut.

Foltynewicz gave up four runs and three hits in two innings. The right-hander struck out five and walked two. He got out of a two-out, bases-loaded jam in the first by striking out Yasiel Puig.

“If you don’t have your fastball command, they’re going to spit on a lot of things, which they did tonight,” Foltynewicz said.

He found trouble again in the second.

With two outs, Foltynewicz hit Pederson and walked Justin Turner before Muncy sent a 1-0 pitch over the wall in center, making it 4-0.

“That three-run home run was big for all of us, including me,” Ryu said.

Hernandez hit a solo shot with two outs in the sixth off Brad Brach. Pinch-hitter David Freese added a sacrifice fly in the eighth.

Ryu allowed a two-out single to Freddie Freeman in the first.

After that, he retired 12 consecutive batters before a pair of two-out singles to Ender Inciarte and former Dodger Charlie Culberson in the fifth. Puig charged in on pinch-hitter Kurt Suzuki’s fly to right field to end the inning. The Braves didn’t advance a runner past second base in the game.

Ryu gave up another two-out single to Ozzie Albies in the seventh. With fans on their feet waving blue towels and the crowd of 50,947 chanting his name, Ryu got Inciarte on a swinging strikeout to end the inning.

“Typically we’re not a team that strikes out a lot, and I think that just the fastball command really kept us off-balance the whole night,” Braves manager Brian Snitker said.

Mike Moustakas scored MVP front-runner Christian Yelich with a two-out single in the 10th inning, and the Brewers bounced back to beat the Colorado Rockies 3-2 in their NL Division Series opener.

After giving up two runs in the ninth that made it 2-all, the Brewers regrouped and soon celebrated. Making their first postseason appearance since 2011, they won their ninth straight game overall.