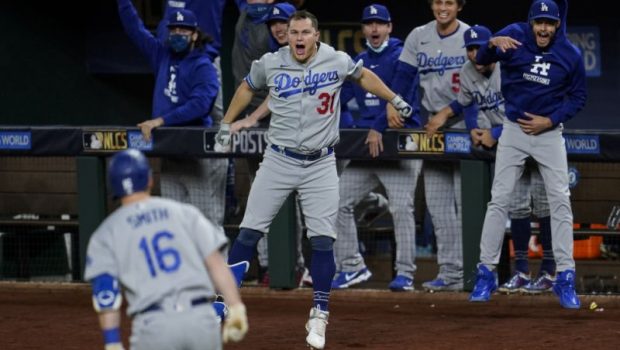 Mookie Betts’ third-inning, shoestring catch altered the momentum, and Will Smith’s sixth-inning home run off his namesake proved to be the difference.

But Corey Seager homered twice in the Dodgers’ 7-3, season-saving victory over the Atlanta Braves in Game 5 of the National League Championship Series, giving him 10 RBIs this week — the most in a league championship series since Nelson Cruz set the record with 13 in 2011.

He might have two more games to catch him.

“That guy [Seager] is something else,” said Braves manager Brian Snitker, whose team still holds a 3-2 series lead. “He’s one of those guys who never gives an at-bat away. It’s very impressive. He’s a dangerous, impressive hitter.”

The Braves lead the series 3-2.

For the third consecutive night, the Rays were unable to eliminate the Astros as Houston used a four-run fifth inning to beat Tampa Bay, 7-4, forcing a Game 7 in the AL Championship Series.

It’s the first time since 2011 that the Rays have lost three consecutive postseason games.