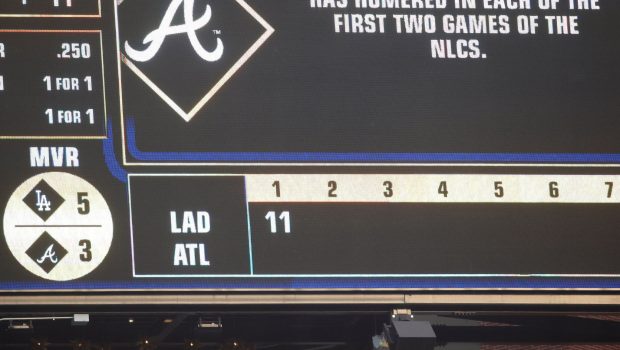 The Los Angeles Dodgers pounded the Atlanta Braves, 15-3, in Game 3 of the National League Championship Series in a trouncing that established a catalog of records.

The Dodgers scored the most runs and hit the most home runs they ever had in a postseason game — and they accomplished all of that in just the first three innings.

“That was fun to be a part of,” said Dodgers outfielder Joc Pederson, who hit a three-run home run to go with three other hits.

The Dodgers hit five home runs, including a grand slam by Max Muncy in a first inning that was so one-sided, it seemed surreal. Dodgers runners just kept circling the bases, until they had touched home plate 11 times — and, yes, that was a record, too — and it all happened before Atlanta’s first turn at bat. It was the most runs scored in a single inning of a postseason game, according to the Elias Sports Bureau, besting the previous high by one run.

There were two walks, two singles, two doubles and three home runs in the inning, including back-to-back shots by Pederson and Edwin Rios before Muncy’s slam. There was nothing Kyle Wright, the Braves’ shellshocked starting pitcher, could do to stop the onslaught.

The Houston Astros weren’t getting swept out of the postseason — not if Jose Altuve and George Springer had anything to say about it.

Altuve, whose errors had led to Tampa Bay Rays wins in two games so far in this ALCS, was one of the heroes in Game 4 as the Astros staved off elimination with a 4-3 win. He homered in the first inning and had an RBI double in the third inning.