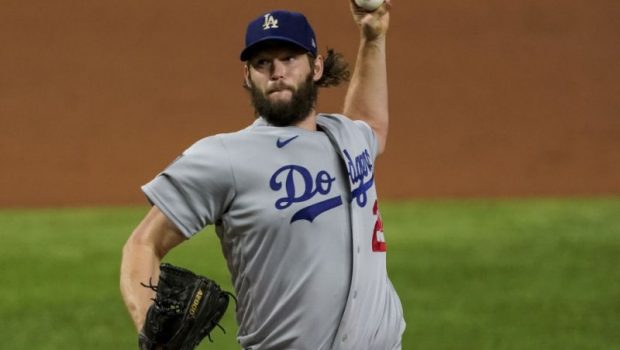 DODGERS LAST WORLD SERIES TITLE WAS 1988: A GAME AWAY NOW!

All it took was a clutch performance from Clayton Kershaw and the bullpen, and the Los Angeles Dodgers are a game away from their first World Series crown since 1988.

They regained control of the series with a 4-2 victory against the Tampa Bay Rays.

The three-time Cy Young Award winner allowed just two runs over 5 2/3 innings to earn his second win of the series. Of course, total vindication won’t be achieved until the Dodgers are celebrating in confetti. But in this series, there can be no denying that Kershaw put Los Angeles in prime position to do just that.

As did the Dodgers offense. Mookie Betts and Corey Seager provided a quick start against Rays starter Tyler Glasnow, ripping back-to-back hits to fuel a two-run first inning. In the second inning, Joc Pederson extended the lead with a solo home run. Pederson is the eighth different Dodgers player to homer in the World Series, which ties a record set by the 1989 Oakland A’s.

To no one’s surprise, the resilient Rays battled back in the third, scoring two runs on Yandy Diaz’s triple and Randy Arozarena’s single. It was nearly tied in the fourth, but Kershaw cut down Manuel Margot trying to steal home. That moment proved to be pivotal after Max Muncy homered in the fifth, extending the Dodgers lead to 4-2.

After Kershaw was lifted, the spotlight shined brightly on the Dodgers much-maligned bullpen. Though on this occasion manager Dave Roberts provided some reinforcements for his usual relief corps, using starter Dustin May as the bridge to his late-inning relievers. The decision paid off. May recorded five critical outs before giving way to Victor Gonzalez.

Gonzalez made his mark too. With the go-ahead run at the plate, he retired Randy Arozarena and Brandon Lowe to end the eighth inning. In the ninth, Blake Treinen pitched around a leadoff single to record the save and push Los Angeles to the brink of euphoria.

After the Dodgers fumbled away Game 4, the Rays seemed intent on putting pressure on the Dodgers’ defense in Game 5.

In some cases, their aggressive baserunning paid off with an extra 90 feet. However, Manuel Margot’s bid to straight up steal home backfired and instead cost them a chance to tie the game.

If the attempt succeeds, it’s another play that might live forever in World Series lore. That it failed will at least make it the most second-guessed deThe series continues with a must-win Game 6 for the Rays on Tuesday.