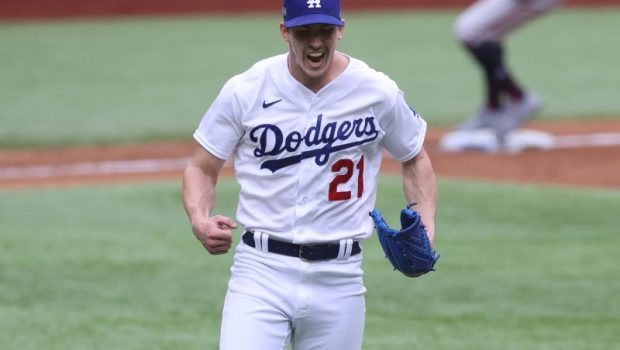 The Los Angeles Dodgers extended the NLCS, defeating the Atlanta Braves 3-1 in a well-pitched Game 6.

Starter Walker Buehler (above) bounced back from his rough outing in Game 1, tossing six scoreless inning to lead L.A.’s second straight win after falling behind in the series 3-1.

The NLCS winner will take on the Rays in the World Series beginning on Tuesday after Tampa Bay beat the Houston Astros 4-2 in game 7 of the ALCS.

As good as Buehler was, it was the Dodgers offense that set the tone in Game 6. After blasting two home runs in Game 5, hot-hitting shortstop Corey Seager followed up with a first-inning home run to open the scoring. The homer was Seager’s sixth of the postseason, which set the franchise’s single postseason record. His 15 RBIs are also a Dodgers’ record.

Justin Turner immediately followed with a home run of his own. With that blast, the Dodgers became the fourth team in postseason history to hit back-to-back home runs in the first inning of a game while facing elimination. The last team to do it? The St. Louis Cardinals against the Braves in the 2019 NLDS. The Braves lost both games and went on to lose the series last October.

The @Dodgers jump on the board early going back-to-back. pic.twitter.com/FGYr4LZnPJ

The Braves had a golden opportunity to strike back in the second inning after loading the bases with nobody out. Buehler wouldn’t cave though, recording two strikeouts and a ground out to escape.

Walker Buehler gets out of a bases-loaded jam ? pic.twitter.com/ZzjJ0Q2CnS

Buehler had his best outing during the 2020 postseason at the best possible time. After walking five batters and looking uncomfortable in the series opener, he walked none on Saturday. The Braves did rack up seven singles against Buehler, but couldn’t break through until the Dodgers’ bullpen entered in the seventh inning.

To his credit, Braves’ starter Max Fried kept Atlanta in the game after nearly falling apart early. He put together 5 2/3 scoreless innings after that rough first frame, striking out five.

Struggling closer Kenley Jansen picked up the save for Los Angeles with a scoreless ninth.