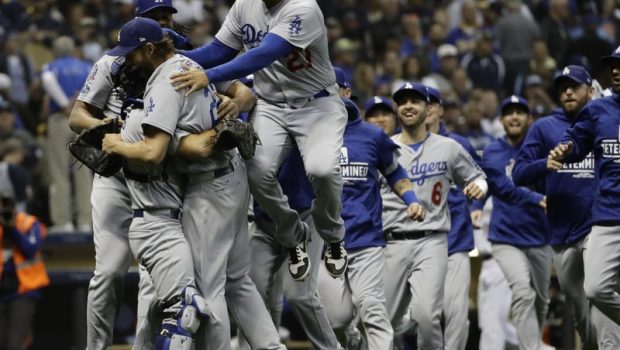 DODGERS GO BIG AGAINST BREWERS, HEAD TO SERIES WITH BOSTON!

Yasiel Puig smacked a three-run homer in the sixth inning, Chris Taylor robbed Christian Yelich with a super catch and the Dodgers took Game 7 of the NL Championship Series with a 5-1 win on Saturday night.

It’s off to Fenway Park for a showdown against the Boston Red Sox in Game 1 of the World Series on Tuesday.

Los Angeles hasn’t won the World Series since 1988. The Dodgers and Red Sox have met once before in the World Series, back in 1916 with Boston beating Brooklyn behind a big game from pitcher Babe Ruth.

Kenley Jansen tossed 1 1/3 scoreless innings before yielding to Kershaw in the ninth. The three-time Cy Young Award winner, pitching on two days of rest after starting Game 5, finished off the Brewers by striking out Mike Moustakas in a perfect ninth.

Kershaw’s teammates mobbed the lefty near the mound after the final out, and the celebration was just beginning for the Dodgers.

“I’m just so proud of our guys for enduring this roller coaster of a season,” manager Dave Roberts said.

The Dodgers have talked about having unfinished business after losing Game 7 of the World Series last year to the Houston Astros.

Now they’ve made baseball’s final series of the year in back-to-back seasons for the first time since 1977-78.

“I know how lucky I am to be a part of it two years in a row,” Bellinger said.

With their 23rd pennant, the Dodgers have matched the rival Giants for most among NL teams.

The Brewers had their chances against rookie starter Walker Buehler, a 24-year-old right-hander who navigated through trouble over 4 2/3 innings. He allowed six hits, including a home run in the first by Yelich that made it 1-0.

Yelich looked like he would hurt the Dodgers again in the fifth with Lorenzo Cain on second with two outs. The NL MVP candidate hit a high, hard liner to left that seemed destined to fall in for a double.

Running at full speed to his left, Taylor extended his glove high in the air just as the ball settled into the mitt to end the inning.